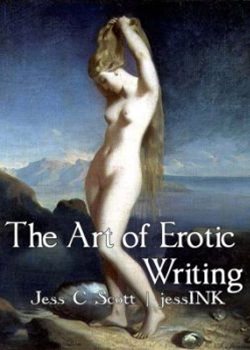 The old-world and tasteful cover were appealing. There is “nudity” on the cover, which the painting depicts in a more sensuous than lewd way.

I wasn’t exactly sure how much the author would cover in an 11,000-word eBook. A cursory glance at the table of contents shows the scope of the subjects touched upon:

(1) “...Indeed, it makes it vital for good erotica to be published, so that we can see for ourselves the difference between the life-enhancing, and the sordid and destructive. . .”
--Erotica: An Illustrated Anthology of Sexual Art and Literature, by Charlotte Hill and William Wallace

These two quotes reflected my own long-time jadedness with pop culture. Once in a while, I truly get tired of hype and wish to find something unique. (On a side note, perhaps that is what partly influenced me to read the entire eBook, since Scott writes in the introduction that she is “the founder of jessINK, an innovative publishing company that focuses on substance over current fads and marketing hype.”)

I thought Scott’s Fifty Shades article in the eBook would be a rant against the popular novel. I would have given it a go if it was done in an entertaining style like Katrina Passick Lumsden’s review. I would also have cut Scott a little bit of slack since she is a self-described “non-conformist.”

“When it comes to original/innovative fiction, I don’t believe that a book should be *only* about gay fiction, or *only* about urban fantasy, etc. I’m all for diversity, open-mindedness (however one wishes to define that), and having the freedom to be who/what you are with yourself and others.”

I like that Scott ended the “Religion and Sex” short essay on this note:

“It would certainly be a good cause to inspire others to map out a sane course in their own lives, between the two extremes of rigid puritanism and total permissiveness (paraphrased from Buddhism and Sex)."