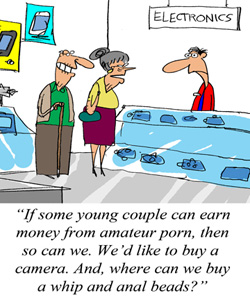 This probably doesn't work for just anyone, of course ...
You're just barely out of high school. You're married. You've recently had a baby. And the job market's in the toilet. What would you do to keep your family afloat?

Would you play the lottery? Sell your things? Sell yourself?

Tyler, 24, and Berkley, 21, are an adorable couple. He's brunette, she's blonde. Both are young, fit and neatly put together. Who wouldn't want to watch them having sex?

Now? They're paying the bills and living comfortably on a cool $1,000 a week. And their lifestyle isn't even disturbing their daughter, who's sleeping in another part of the house while they perform.

“Because it is a job for us to have sex with one another, sex outside of work doesn't really happen,” Tyler said. “It's a total sex killer.”

“Having sex off and on for two, three hours, it gets kind of hard, especially the kind they want,” Berkley said. "It's, like, rough, so it wears on you a lot."