The Slavette Diaries: I Am a Collared Slave: Now What? 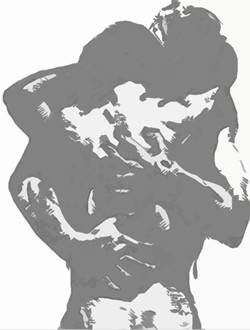 Today, Slavette wades through the murky waters of relationship-negotiation within the confines of the master/slave dynamic, without litigation, butcher knives, or invoking a demon.

Adjusting to Life in a Master/Slave Relationship

Congratulations! Whether it took you days, weeks, or years to find an owner, you’ve done it. You can relax. You’ve achieved your goal: Your owner has accepted full responsibility for you, and as long as you follow orders, you never have to worry about anything ever again. You’ve worked hard to get where you are, and you have a right to savor your success. Take a deep breath and enjoy the moment.

Getting a collar (or similar physical symbol that designates officially entering into a master/slave relationship) is very similar to getting married. It is a point of transition, rather than a statement of completion. When I accepted my first collar, my master and I didn’t know each other very well, and neither of us had experience being in a master/slave relationship. The process was difficult at times, but that was understandable, since we were both learning as we went along.

The second time I accepted a collar, I’d known my master, and had been serving him for years before we took the next step. The second transition was not as difficult as the first, but it definitely had its share of vexations. I had not anticipated that a collar would make any real difference in the dynamics of our pre-existing relationship. I was wrong. The most surprising—and frustrating—part of my second collar experience was running into many of the exact, same obstacles I thought I’d successfully overcome with my first. At least I have the satisfaction of knowing I was not alone. Some of my experiences turned out to be fairly common among newly collared slaves.

The following are some hurdles you may encounter, and suggestions on what you can do to overcome them. (Don’t worry, however, every person is different, and you will most certainly have the masochistic joy of discovering your own personal landmines.)

Bouncing Reality Checks …Do I Have a Victim Complex?

This was the most personally frustrating conundrum I dealt with when I accepted my second collar. I have a very strong sense of the dignity of service. I am an outspoken advocate of the concept that slaves are competent, intelligent people and I find it offensive when I encounter someone who treats me as an inferior simply because I identify as a slave. In spite of that, I found myself questioning my emotional health when I accepted a collar. Is this really a healthy relationship dynamic, or am I acting out a subconscious victim complex?

To me, this demonstrates just how difficult it is to overcome cultural influences and the lessons of childhood. I worked through this dilemma by reminding myself that every relationship has its problems, but as long as I felt strengthened, rather than diminished by the commitments I’d made, then they were healthy. I am only a victim if I deny who I am in order to conform with the expectations of society.

No matter how well you know yourself and your owner, how long you have been a slave, or how thoroughly you’ve negotiated the details, a collar has the potential to change everything. Until you actually feel it around your neck, or your owner sees you wearing it, there is no way to predict exactly how either of you will react.

With my first collar, both of us had a number of Holy shit, what were we thinking? moments. Changes in perceptions and feelings can come on suddenly or gradually, but it will happen. One thing I noticed immediately once I had been collared by my second master was an almost overwhelming compulsion to have other people show him the respect I felt he deserved. I wanted everyone to acknowledge what I perceived to be his god-like qualities, and wage holy war on anyone who did not agree with me. Thankfully, my vengeful yearnings only lasted a few days, but I had to endure an emotional rollercoaster until I finally got my feelings under control. The moral: Expect the unexpected, communicate, and be patient.

The Laws of Physics: Action and Reaction

Accepting a collar generally means agreeing to abide by a set of rules and protocols. In theory, the rules sound reasonable, and might even have caused you to drool a little when you thought about actually performing your duties. Unfortunately, what seems good in theory doesn’t always work out well in practice. Being naked at home sounds really sexy—until you have to cook bacon.

Surrendering to the control of another person can provide both a sense of security and a feeling of freedom, until that person is unavailable when you need guidance. Accepting a collar takes a period of adjustment. The permanent changes in your behavior that you undergo will change your mental state, as well. Mostly, these changes are positive, but there will be times when the overall results may not be in your best interests. Again, the way to get through the unexpected challenges is to be patient with yourself, communicate, and renegotiate when necessary to find a healthy, yet fun, balance.

Usually, the question of who maintains control over a slave’s finances and valuable possessions is a standard component of the negotiations and agreed upon by all parties before entering into a master/slave relationship. If you have a large bank account or own valuable property, it is easy to be aware of the impact your master/slave relationship can have on those things. However, our money and valuable possessions are usually only a small part of our possessions. What about everything else we own or control?

I am a very generous person with my money, but I am also very territorial and protective of “my stuff”. Unfortunately, I had no idea I felt that way until I accepted my first collar. Of course, I want to serve my master and offer him everything I have to give, but does that have to include my favorite chair? Do I have to put away my knickknacks because he doesn’t like “clutter”? I’d been saving that wine for a special occasion, but he doesn’t like wine, so he gave it to a friend who does—and he didn’t even ask me about it first! It’s not fair, that was mine!

Wait a minute, put down the butcher knife and remember that you consented to this arrangement. I will admit this was one struggle that I never fully overcame as a collared slave. Whenever such a situation came up, I had to remind myself that it was not only “fair”, but it was a sign that my master fully embraced and accepted his ownership of me. My master wasn’t taking anything from me; he was accepting what I’d originally offered to him. Repeating that thought in my head allowed me to keep silent—most of the time—and out of prison.

Even so, there were a few times I had to renegotiate the agreements I made with my master regarding control of what most people would consider trivial items. An example that comes to mind is leftover food. My leftovers are mine. I know they are waiting for me in the refrigerator, I think about them during the day, and I want them when I’m hungry. If I’m hungry and don’t get what I want, it’s not pretty for anyone. So, given a choice between an encounter with psycho slave or letting me retain control of my leftovers, my master agreed to the proposed change in our agreements.

What I’ve learned from accepting collars is that when you do, one chapter ends and another begins. As the story opens, you’ve found happiness in your new owner, but are still working to overcome obstacles to achieve your goals. When the next set of challenges arises—and they will—hopefully you will have learned from your mistakes, but it’s also important to remember your successes and the joy they’ve brought you. Trust yourself, trust your owner—if you can laugh and support each other as you trip over the little hurdles you encounter on your journey, then you will already be building the trust you need to get over the big ones. Remember, Cinderella got rid of a stepmother, but she still had to deal with a mother-in-law; Snow White had to deal with the nasty gossip about her dwarf fetish; and Jack had to fight off a lawsuit from environmentalists regarding the rotting beanstalk on his property—but they all still lived happily ever after.
Tags:
Views: 1999
Related articles


My "leather resume" shows my extreme administrative masochism tendencies. With my first Master, I was honored to receive the 2001 Pantheon of Leather Couple of the Year Award, Pantheon of Leather Small Event of the Year Award (Together in Leather 2004), and International Master and slave 2002. I have been a founder and board member of several groups, given over 200 workshops across the US and Canada, co-produced a leather event (Together in Leather), and helped launch what became known as the "Leather Girl Movement".


In addition to being an author, I am an avid reader, a certified geek, and have an addiction for a select few reality TV shows.


Although "one size does not fit all", small or medium will work well if anyone wants to buy me presents. There are soooo many things on my wish list that really need to be in my closet, on my body, or thrown in a pile in the corner of a bedroom...