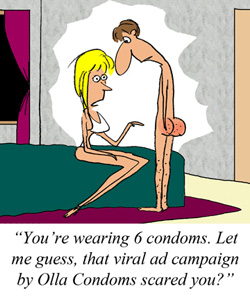 Fake profiles of babies will probably all get deleted ... someday, somehow.
It sounds like an elaborate punking scheme: you have a friend on Facebook, Joe Shmo, so you make up a profile for a baby with a baby picture as the profile pic, call him Joe Shmo Jr. and have him friend-request Joe. He’ll freak the hell out, right? Is this some vile way for a former partner to introduce him to the son he didn’t know he had?

No … it’s an ad for Olla Condoms. The Brazilian condom company recently started the viral web ad campaign with the tagline “Avoid surprises like this. Use Olla Condoms,” says the Pay Dirt blog at SmartMoney.com. You can see Olla’s video about their campaign here, courtesy of YouTube:

Clever, no question. Invasive? Deceptive? Probably, and Facebook doesn’t care for it, either, not even in the name of safe sex. Pay Dirt says the networking site disapproves of the guerrilla marketing tactic, dreamed up by Brazilian agency Age Isobar and tied in to World’s AIDS Day (last Thursday). Facebook spokesperson Annie Ta told Pay Dirt: “It’s a violation of our policies to use a fake name or operate under a false identity.” Matt Wallaert of the digital strategy firm Chumless.com told Pay Dirt that the idea has “emotional salience,” but would be more effective if it helped make condoms convenient to buy.

Oh, and just by the way, this is probably the best condom ad ever made.