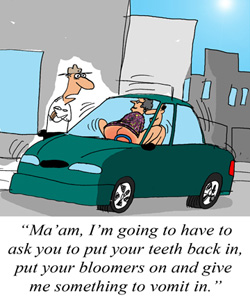 Good for grandma, right? Well, maybe not. The cops don't approve.
Well, now this isn't something you see every day. Grandma got caught out in the parking lot of a shopping center in the back of a Buick Regal with her ... one night (or afternoon, as the case may be) stand? Oh, grandma, you modern woman, you.

Her name's Rita Daniels and she's 71 years old. And when the Farmington, Mich., officers questioned her about the man she shared the back seat of her Regal with, they discovered she didn't even know his name. However, they'd met at a bar for drinks. We're guessing Internet hook up, perhaps?

Anyway, the officer who arrived on the scene, Andrew Morche, asked Ms. Daniels' date what he was doing. Apparently the fogged up windows, rocking Regal and stark naked couple wasn't obvious enough for him. Her 54-year-old lover, Tim Adams, looked at the officer and replied, “I'm fucking this chick.”

Of course they were arrested for indecent exposure. An investigation said that a 10-year-old boy allegedly saw the couple in the act. But grandma and her friend don't seem overly concerned. The best part of the whole story is how pleased with themselves they appear to be in their mugshots. Which are now all over the Internet. This all happened Labor Day weekend, apparently, but it's new to the 'Net.