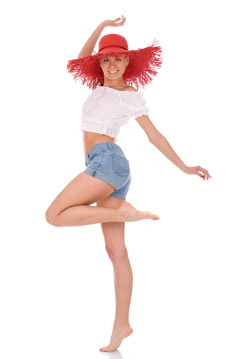 The Buckle of the Bible Belt is hardly the place one would expect to find a 17-year-old, self-assured pro-sex feminist girl. The South is stereotyped as a place of deep religious and sexual repression, which in turn leads to all sorts of hot, illicit, and dangerous sex. When people find out I am from there—which generally occurs the second I open my mouth—in addition to expecting me to be inbred, they expect stories of hot summer nights with male family members or traveling salesmen. However, I did not, however, grow up in a Flannery O’Connor story, nor am I Blanche Dubois.

My parents came of age in the summer of 1969. They met at a rock concert. My father—a businessman, not a hippie—often attended concerts to watch hippie girls. When Mom got up on stage and asked the crowd if there was any place she and her friends could stay for the night, my dad took one look at this brazen, braless, hot young hippie chick with long black hair, matching fringe vest, miniskirt, and boots, and thanked the lord that the sexual revolution had come to South Carolina at last.

With cajones the size of bowling balls, he introduced himself to her as “Jesus” and offered her a place to stay. Three days later, they were married. Nine months after that, my sister was born. The marriage was fiery, and although the love was deep and the sex was hot (I know this thanks to their lack of appropriate boundaries), they divorced after six years, two daughters, several affairs, and millions of dollars earned, spent, and lost to partying and bad real estate deals.

My parents were affectionate, passionate, and highly intelligent. They were also moody, intense, and survivors of troubled, abusive childhoods. Although not perfect, they were determined that my sister and I would never suffer that same fate. I do not remember a time when I did not know about sexual abuse. My mother had been victimized repeatedly throughout her childhood, and made sure that we knew that our bodies belonged to us. She taught us that our sexuality was something for making us feel good, and not something to barter, trade, or give away. To teach a girl that her sexuality was for pleasure first, not reproduction, expressing love, or gaining favor, was truly a revolutionary idea.

I was always the instigator of sexual play with my peers, and of course, being the South, those peers sometimes included cousins. I knew that I liked both boys and girls. I told my mother that I wanted to be a ballerina and a truck driver when I grew up. I had passionate crushes from kindergarten on, and was never shy about telling the objects of my affection how I felt. I learned at a very young age how to deal with rejection, and how to pick myself up and get over it—and that someone not liking me had much more to do with them than it did with me.

As I reached sexual maturity, I could barely contain my excitement. I’d been taught all the precautionary measures about safety, and could not wait to share with someone else what I had been doing to myself all these years alone! However, this was when I started to realize that the way I had been taught was very different from others.

Girls were supposed to play games, be coy, and let the boy make the first move. Boys were taught to go after IT, and girls were taught to protect IT! Many of my classmates attended church on Wednesdays and Sundays, and talked the talk about abstinence until marriage. However, it became readily apparent to me that it was these same classmates getting drunk on Friday nights and having booze-fueled sex. They were unable to have sex without being drunk, and would not take responsibility for their actions. To me, this was the ultimate sin.

At 15, I began dating a lovely boy who was not at all frightened of my gigantic personality, and in fact, seemed intrigued by it. He and I spent many hours on his parents’ couch making out, and learning about each other’s bodies. He was the first person, other than myself of course, to make me come, and I more than happily returned the favor. However, he’d been taught the sex was shameful, and when I expressed a desire to have intercourse, he broke up with me. Yes, you read that right. He broke up with me for wanting sex. Guess sexual stereotypes limit boys just as much as girls.

For the next year, I was on a mission to get laid. I had a taste of partnersex, and wanted more. However, a loud, opinionated, know it all girl of 17 is limited in her choices, as many boys her age would rather date a mouse. Then I met Lee. He was 17, experienced, had his own car, and was angry enough with his parents to have a sexy “bad boy” air about him. He and I became friends, and because we lived in the same neighborhood, he began driving me to school.

Eventually we started dating. I knew he was the first man I would have sex with. I told him, and he accepted the challenge. I made my own appointment to the gynecologist for birth control, and got on the Pill, then I presented Lee with my list of demands. First, I demanded that we spend the night together. I was a worried that I might react emotionally, and wanted to be sure he’d be with me the whole night. Second, even though I was on the Pill, I told Lee that he would use a condom, both for protection and staying power. I also told him that in order to make sure I was properly aroused and that he would not come too quickly, we would both orgasm from oral sex prior to actual intercourse.

I told my mother my plans, and to this day, she remains both proud and highly amused: proud that I had the sense of self to know exactly what I wanted, and amused that I had the balls to present my plan to her for approval. My first experience set the stage for my future sexual experiences. I learned that I could find partners who were willing to be open and honest, that I did not have to settle or perform, and that anything done between consensual partners can be a lot of fun. I’ve never had sex while drunk, faked an orgasm, or had unsafe sex. I continued to preach pro-sex feminism to all the friends who sought out my advice, and even made a career of it while working with victims of domestic violence and sexual assault.

I chose all the boys I slept with carefully and never had the need to cut one out of my life after the affair ended. I even remained friends with the boy who broke up with me because I was pushing him for sex. Throughout college, he and I saw each other occasionally through mutual friends. He was just as sweet and shy as ever, and still remained one of the few men who always encouraged me to be myself no matter what. After graduation, we began to hang out as friends. One night, we went to see Forrest Gump together. Although nothing romantic happened, I called my best friend and told her, “I am going to marry that man!” He and I remained pals for a while, began to date, and then fell in love again. I had the great pleasure of taking his virginity at 21, and we were married almost 10 years to the day from when he broke up with me.
Tags:
Views: 1823
Related articles