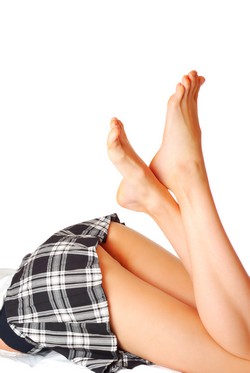 I saw my first repeat client today. I had an even better time with him this time—got to be more myself, though he did complain mildly that I had hair on my pussy. Eh, most guys like it. I even let him play with my asshole—and he liked it when I played with his.

This job is unpredictable, that’s for sure. This morning I had a guy not show up (his meeting ran late) so I called him to check on things, and left him a message telling him I was going to go on with my day. I knew from our previous correspondence that he wasn’t being a jerk.

So then he called back, but I just missed his call. Then I got another call, and it was a guy seeing if I had any openings. “How ’bout right now?” I said.

Then I called the original guy back, and he was hoping to still meet. You snooze, you lose buddy! He was nice about it though. He asked if he could at least stop by and say, “Hi,” and lay his eyes on me, since he was right in the area. Since the other guy wouldn’t arrive for another 20 minutes, I said sure.

He was a cute old man, TOTALLY not the kind you’d expect to hang out with whores and pay to have his cock sucked. We exchanged pleasant greetings on the front porch.

Anyway, I’m waiting for the replacement guy to show up and I’ll bet I’ll have wished to have gotten with the other guy instead.

I got interrupted by the other guy arriving—and I was right! I would have much rather stuck with original guy. The replacement guy wore tassel loafers, had a beer belly, and a Cardinals jacket! And he kept sucking on my body parts! It actually felt good, like he was a greedy little baby trying to get sustenance, but I couldn’t enjoy it cuz I was worried he would mark me. I need to check and see if I still have my left tit… yep, phew.

The fact that he tried to turn me into a walking hickey and acted like he didn’t know my price was 300 (he cockily handed me two one hundred dollar bills, forcing me to ask for the third, totally uncool) means this boy is kicked off the team. Game over. You are benched, Buddy!

I got home and prepped for Lenny. He was really self-conscious of his looks. The way he made it out, I was expecting the Elephant Man—but he was like many of the other guys—older, fat. Turns out, he only lives a few streets away. We’re neighbors! I told him I had just bought new undies and I made him sit and watch me model them. I flounced about, giddy in my polka dots. He finally roped me in and we chatted a bit, naked and lying together, and he said, “Geez, I dunno why Junior isn’t responding.”

I said, “It’s cuz we’re chit-chatting and he’s getting ignored. He wants me to shut up and pay attention to him!”

So I did, and he came too quickly. He apologized, and I asked if he thought he could climax again. He said he’d sure try. So we talked more about things he liked, and I finally got it out of him that he had a bit of a foot fetish, and liked foot jobs. I said, “Ooh, so it’s good that I greeted you barefoot!”

So he got hard talking about such things, and we put a raincoat on him and I tried riding him (a lot of the fat guys want you to “hop on pop”), but Junior wasn’t having it. He wouldn’t get hard. Finally I announced matter-of-factly, “I think Junior wants feet.” I told him I had never done that before but thought it’d be fun.

He said okay, as long as I didn’t think he was a freak. Gosh no!

Needless to say, I’m over my foot aversion. Thanks to whoring and associating feet with pleasure and embracing them as part of a woman’s beautiful body, I can be barefoot around people! I’ve even painted my toes. Though, I still won’t wear sandals. Eh, I’m cured enough.

Afterward, he asked if I’d be up for going to lunch sometime, as long as I didn’t mind being seen with a fat old guy. I told him not to be silly, as long as he didn’t mind me going around showing people my underpants. HA!