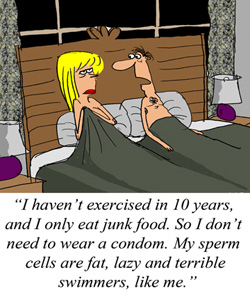 And guys want healthy, happy little swimmers, right?
If you move a little more your sperm probably will, too. Sounds like a no-brainer … I mean, they sort of have to go where you go, right? But the results of several studies show that men who engage in a moderate amount of exercise— not no exercise or strenuous exercise— and consume a “prudent” as opposed to a “western” diet have better sperm motility (meaning their sperm are better little swimmers.)

The Telegraph reported today on three papers presented at the American Society of Reproductive Medicine which highlighted “the importance of the lifestyle of a prospective father” in determining a couple’s fertility. The first study, from the Harvard School of Public Health, divided the subjects into two groups by diet. The “prudent” group ate lots of fish, fruit and vegetables (a more Mediterranean diet) and the “western” group filled up on pizza, red and processed meat, high energy drinks and snacks.

A separate Harvard study found that men who took 1.3 percent of their calories from trans-fats had less sperm per milliliter of semen than men who took just .7 percent of their calories from that form of fat; and a study from the Yamaguchi University School of Medicine in Japan, found that men who did moderate physical activity, like brisk walking, had more motile sperm than those who did little or strenuous physical activity.

And no, this does not mean if you eat more fast food you don’t have to use condoms anymore. Gahh.
Tags:
Views: 1318