Is Divorce Really A Bad Thing? A History of Marriage (and Divorce) — Part 2 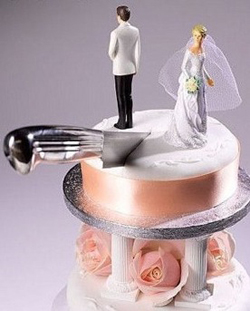 Last week when news of Kim Kardashian's divorce shook up the Internet, I asked: What's with the so-called “sanctity”of this marriage? Does the institution actually have any sanctity?

The short answer? No.
Long answer: Which kind of marriage are you talking about? The kind when literally selling your wife was okay? The kind when men took multiple wives? The kind where you can make money from a reality TV wedding then make more money from a quickie divorce? The reasons for marriage, throughout its history, have never stayed the same, so it is hard to argue there is any sanctity.

But marriage is still a bedrock cultural institution; and with it comes divorce. So now, I ask: Why isn’t divorce a good thing? When news of any divorce spreads, it is with a certain sadness, even in celebrity marriages (RIP Thurston Moore and Kim Gordon) or sometimes it is with a little smugness (haha, Kim Kardashian) but divorce is rarely seen a positive force.

Sure, there is something about it that feels like putting on your shoes backwards, but perhaps even more bizarre is the fact that we never celebrate divorce in the U.S. How could it always be a bad thing, considering the high divorce rate; or the fact that divorce was actually a feminist victory? The right for women to divorce was hard won.

In 1963, Betty Friedan called out “the problem without a name” in her seminal feminist book The Feminine Mystique. Friedan was writing about the ennui among white, middle-class, American housewives who busied themselves with endless housework, lived vicariously through their children and had affairs in an attempt to fulfill themselves. Friedan’s book would eventually help place women in equal droves into the workforce.

At the time The Feminine Mystique was published, only eight states gave a wife any claim at all to earnings her husband accumulated during the marriage. There were also no protections against marital rape or wife battering.

Stephanie Coontz interviewed more than 200 men and women who read the The Feminine Mystique when it came out, for her book A Strange Stirring. “The most surprising thing I learned in the interviews was how many wives took their second class status for granted. Women told me about being forbidden to read ‘that book’ by their own husbands,” says Coontz.

One woman brought Friedan’s book to her friend’s house, the next day the friend’s husband came over to have a talk with her husband, and told him to never again let his wife bring “that book” into “his” house. This was a time when, if a wife went to a counselor and complained about being hit by her husband, the counselor’s first question was usually ‘what have you been doing that might have provoked this behavior?’

The early days of marriage counseling was almost fully centered on “fixing” the wife, it was always about what she was doing wrong, how she was not feminine enough, available enough (You are doing it wrong, more Stepford!). In her book, More Perfect Unions: The American Search for Marital Bliss, Rebecca Davis Marriage traces how this happened.

This era of couples counseling spread rapidly after World War II, which was a time of upheaval for gender-roles. “Men of that era were raised to value their masculinity based on how well they ‘provided’ for their families. Mass unemployment created a crisis in masculinity for men who could not find work. Then during World War II thanks to the labor shortage of men in the services, many women (and even married women) got jobs, and good jobs at that,” says Davis.

When the war ended in 1945, most of these women were fired so the jobs could go to men who were coming home. Women were pushed out of the workforce and into the home, “and the advice industry got busy telling married women how important their domestic roles would be to helping their husbands readjust to peacetime,” says Davis.

The couple wouldn’t even go to counseling together, but come in separately, and often it was just the wife who came in for marriage counseling at all.

So this was the social landscape in which The Feminine Mystique was born. Coontz describes the women who were impacted by Friedan, as being full of self doubt, one women remembered crying in front of her kitchen sink every morning, because she wanted to go back to school. Coontz found this self-hatred a bit strange, because these women were so privileged. One of the things Friedan has been (rightly) criticized for is focusing solely on white, middle-class/upper middle class women. Coontz points out that in 1960, 64 percent of Black women held jobs outside the home — compared with 27 percent of white counterparts.

But Friedan helped feminism reach mainstream, and as the movement took hold, wives were granted more divorce rights. And the divorce rate went up. “Now people could leave bad marriages, and [with feminism] there were new sources of conflict between men and women” says Coontz. There was also a sharp decrease in wives’ suicide rates, as well as the rate of wives killing husbands.

There was almost a virtue to divorcing in the mini-skirted 1960’s and 70’s; the woman who divorced was the stereotype of a woman getting what she wanted out of life. “In the 1970’s there was a certain admiration attached to getting divorced and fulfilling your dreams and ‘personal growth,’” says Pamela Haag author of the book Marriage Confidential.

However, the divorce rate has been steadily falling, since the peak in 1979-1981. In 2011, The New York Times ran an article called “How Divorce Lost it’s Groove” in which Pamela Paul wrote about how divorce has become so rare among a certain college educated, liberal set (those same women Friedan was once addressing) that when these women do divorce, they face judgment and isolation from their communities.

But the over-all falling rate of divorce would make it seem that when we break-up, it is for a good reason. So why again, is it taboo to throw a party, with a slicing of the divorce cake?

One can argue a healthy divorce is better than an unhealthy marriage. Perhaps what the future holds is more of the idea of a “good divorce” — parents who welcome the other’s new spouse, get along, perhaps even vacation together. In that same New York Times piece, one mom describes that it is she and her ex-husband who shuffle around instead of the kids going back and forth. “Enter the latch-key moms,” wrote Paul.

Perhaps, as we move forward with the institution of marriage, one of the things that might need to change is how we think about divorce. If we can entertain the idea that marriage has any “sanctity” is ludicrous, so should we entertain the idea that “till death do us part” is likely, not going to happen. Perhaps there is room for the idea that marriage can be a limited partnership, rather than a permanent one; divorce then, would be viewed as simple an end to a partnership that has run its course, rather than a breaking of the vow to stay together forever. I can’t believe I am saying this, but kinda, you go, Kim Kardashian?
Tags:
Views: 1648
Related articles