Secrets of a Sex Writer: Unpacking My Relationship Baggage 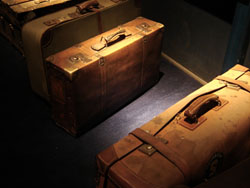 If you ever see me on the street, chances are, I'll be carrying at least three bags. More than likely four, possibly five. Usually I have my purse, a bag with my laptop, various magazines, books & papers, then a few others with shoes, gym clothes, more books, maybe a bottle of seltzer. The bags are, as I told someone recently, a part of me, but they are also, literally & figuratively, my baggage.
I’ve been thinking a lot about relationship baggage, all the drama and history and highs and lows we carry with us from one relationship to the next. I hope I don’t seem terribly flaky when I make this confession, but here it goes: my sex and dating hiatus is officially over. In the last week, I started seeing someone, and while I didn’t plan or even necessarily want to be in a relationship, I was very intrigued by this person and after a few dates now we are officially dating.

It’s made me think about the reasons I wanted to take a hiatus in the first place, and one of them was so that I could ease some of the baggage that I felt so mired in over the last year or so. It’s like drama is constantly seeking me out, wanting to not just hold my hand or give me a hug, but to smother me with its neediness until I submit to its inevitable dominance. Yes, drama is like a bad top who wants to impose their will on me without my consent.

Except what I learned while taking that much-needed break, is that while that’s exactly how it feels when relationship drama arises, I do have autonomy and free will. I don’t have to consent to letting drama rule my life. So I’ve been taking as many active steps as I can to make peace with my past relationships, with my exes, and with the drama that some of those seem enmeshed in.

By stepping back and looking at my own life and both my complicity in the drama, and ways I can work on myself so I don’t need to rely on that messy but, yes, sometimes euphoric high, I was able to look at some of the dark places inside myself that, perhaps, led me to pursue extremely unavailable people. My break seemed so ideal because I couldn’t conceptualize being in a relationship that didn’t involve all sorts of miscommunication, drama, jealousy, confusion. I’m talking about things like thinking I had plans with someone when I didn’t, thinking lovers were looking for more than they were, and falling, very hard, for someone very taken.

Those were things I did, and I’ve had to recognize my own responsibility and magical thinking that kept me mired in those situations. It’s not that the people I was seeing are bad people, or don’t care about me, but that we weren’t on the same page in terms of what we wanted or what was possible out of our joining together. When that happened over and over again, I had to question whether it was them, or me, and take a somewhat extreme action.

What I found was that once I started focusing less on other people and how I could please them, and more on how I could feel better about myself and my own life, even the tiniest proactive steps toward self-improvement made me feel like I’d just gotten an extreme makeover. Every time someone tells me I look good lately, I smile, pretty sure I can credit that not to my highlights or fishnets or outfit, but to feeling good. No, that’s not always the case, but when I feel very bad about myself, I want to try to unlock that on my own, to unpack it and examine it and try to solve it. When I, for instance, this past weekend, snapped at a Starbucks clerk, threw the butter they’d given me on the sidewalk in a fit of anger and then burst into tears on the subway, that was a sign that something was wrong.

Of course asking for help is essential, and I do. I talk to my closest friends and my therapist. I vent. And now that I’ve sort of stumbled into a relationship, I will probably be talking to my new boyfriend. But, and this is a really big but, I have a lot more work to do on myself. I think it’s naïve to expect all those loose relationship ends to simply get sewn together instantly, just because I’m seeing someone new. It’s not like a new partner’s attention and affection is a magic balm that soothes over all past hurts. To think a person could do that would do a disservice to them, to me and to our potential relationship.

For a long time, I focused almost exclusively on the pain I was feeling regarding certain partners. My own sense of hurt and rejection seemed so paramount it was hard to have even a shred of empathy, and that mindset also led me to think that I somehow deserved to get the scraps of attention thrown my way. I let myself get extremely far away from the kind of person I want to be in the pursuit of a series of ongoing people, and that is the behavior I was looking to put a halt to.

Have I succeeded? To a large degree, yes. But I’d be lying if I said there’s not still a part of me that wishes certain endings had been happier. I still have plenty of emotions, not all of them pretty, for some of my exes. I have moments of wistfulness and nostalgia when I hang out with them, whether we’re at High Holiday services or dinner or chatting via email. There’s a difference between baggage and history, and I wouldn’t want to erase my past even if I could.

What I do want to do is focus on the good qualities about the exes I’m friendly with, but also to be as strong and proud of myself as I can so that no matter what they think about me, I know I’ll be okay. That self-esteem and self-love has to be there first before I can truly let someone else into my life. I can pretty safely say it wasn’t there in January, or probably February. I feel like I’m in some kind of remedial “Being an Adult” class where I’m learning a lot of things for the first time.

I don’t necessarily plan to detail everything, or even anything, about my new relationship. I feel protective of it and of myself. But I can say that I’m excited to see what happens as we get to know each other. The work of unpacking all the relationship baggage I’ve accumulated is not easy. I’m not going to pretend I’m oh-so-evolved that I don’t have my moments of teariness or hurt, that I don’t run through my mental mini film festival of greatest hits and most devastating memories at times. I’d ultimately rather be the kind of person who’s all in when it comes to my emotions, who’s willing to risk my heart in the name of love. Some days I know how to steer myself out of the way of drama’s resurgence and some days I don’t, but ultimately, I feel extremely lucky to be exactly where I am right now, no matter how much my baggage weighs. I’m strong enough to carry it.
Tags:
Views: 1906
Related articles