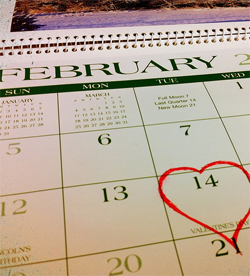 While some of us are hating on Valentine’s Day for various reasons of our own, this author points out a number of awesome health benefits. Health benefits from a “Hallmark holiday?” Read on.
We don’t usually think of holidays as having sexual health benefits, and most of them don’t if you rate them on the amount of anxiety they generate. Valentine’s Day defies the holiday = stress reputation (I already hear the unromantic and single folks screaming, “You’ve Got To Be Kidding!” Just bear with me on this one, okay) because of it’s ability to promote intimacy, something that is good for us all. With its enchanting companions – sex and pleasure – the day of love can enhance well-being by means of romance and affection, even if or despite anyone’s penchant for doing it (multiple meanings to that intended) alone.

Starting with the obvious, on Valentine’s Day, aphrodisiacs take center stage. Long before cupid was shooting mythical arrows into our hearts, the idea of eating something sexy was rooted in ancient traditions from around the globe (think Montezuma and Cleopatra).

There are the usual culprits like chocolate, wine and oysters, each with long histories as libido boosting aids. Oysters share a subtle similarity to the female anatomy, which along with their high zinc content may account for their ability to rev a man’s engine. Dark chocolate has been accused of doing some fun things with our sexual chemistry, and the lycopenes in wine do a heart good. In short, we now have rudimentary (studies are generally small and limited) science to support certain foods’ abilities to put lovers in the mood for more than a good nights sleep.

My personal favorites run amok in the exotic garden. The world’s most expensive spice, saffron, turns the creamy palate of risotto a lovely shade of gold, pomegranate’s ruby red puckers lips, and avocado's smooth texture boasts an abundance of sexy nutrition. Things like zinc, calcium, magnesium, and vitamins c, e and b, and fatty acids found in cold-water fish (like salmon) nuts and other foods associated with the Mediterranean diet. Each is remarkable and good for cardiovascular health, which in turn enhances well-being, particularly for men who depend on good tickers for superior performance (think of that as slogan for a night of play).

The suggestive nature of certain edibles (think asparagus) is part of their mystique as much as nutritional value. Getting your heart going is a surefire way to get your hard on (or vice versa), and sharing a meal, especially a home-cooked one prepared with a healthy dose of love and sexy foods is a cookbook away (think Intercourses). Warning: romantic interludes may help your body release certain feel good neural cocktails (think oxytocin), another potential benefit of Valentine’s Day.

What makes a relationship thrive is as much an art as an emerging science. At primal biological levels we know that social bonds are modulated by oxytocin, a chemical messenger also known as the cuddle or bonding hormone. Why and when our body releases it is still under investigation, though orgasm, affectionate touch and breastfeeding are associated with elevated levels in the blood (think “let-down” to understand how powerful it can be). Nipple play has even been suggested as a means to increase the release of oxytocin. Researchers have found higher levels of oxytocin in women who are hugged more frequently, and higher levels are linked to lower blood pressure and less stress (which is partially attributed to another hormone called cortisol).

Related small-scale studies have examined the relationship between stress, relationships and the stress hormone, cortisol. Researcher Lisa Diamond looked at couples living together and tested them for cortisol levels before, during and after being separated for up to one week. They found couples that slept apart had higher levels of cortisol and slept more poorly. In a statement, Dr. Diamond, from the University of Utah, said, “the findings can contribute to our emerging understanding of the processes through which longstanding romantic ties are beneficial for our health.”

It gets a bit trickier figuring out the interaction and role of hormones on the nervous system, brain research being more complicated as it were, which is why our understanding of how hormones are involved in bonding, sex and health is like a cup with unlimited capacity for holding more knowledge (think job security for sexy science geeks).

More than a Hallmark Holiday

Valentine’s Day is often criticized as the ultimate “Hallmark holiday” replete with cheesy cards and obligatory gifting. The potential for letting your partner down is one of the reasons why many would-be celebrants resent the pressure to celebrate. However, this has value in being reminded to give and appreciating our partners.

For starters, the act of remembering to give a token of affection has upsides. Studies that show conscientious people are likely to maintain healthier lifestyles. Thoughtful acts like those associated with Valentine’s Day – romantic dinners and giving gifts or cards – also lead to long-term relationship stability, less drinking and smoking, better weight management and longer lives.

If all this feels too fuzzy and out of sync with your current sexual love experiences, there’s economic data to suggest Valentine’s Day has your best interest at heart. A Huffington Post article states: “Researchers from the MIT Sloan School of Management found that the timing of saying ‘I love you’ for the first time to a partner is based on cost-benefit analysis. They also found that men are more likely to say ‘I love you’ first.”

The article further quotes the researcher, Josh Ackerman, as saying, “when and why we express romantic love are guided by deep-seated motivations that are best understood in an economic framework. Love confessions are akin to economic resources that people use to negotiate evolved romantic interests."