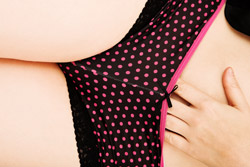 In some ways, American culture is still stuck in the 1950s. Although in theory the sexual revolution has happened and we know that women can be just as interested in sex as men, in reality the sexual double standard is alive and well and living in Paris…Texas.

Society is far more comfortable with sexual promiscuity in men than it is in women, and so we often focus on the extent of male sexual behavior and forget about all the women they are having sex with.

Women like sex. Not all women, of course, but not all men are terribly interested in the beast with two backs either. The difference is that while it’s acceptable and expected for men to like sex, it’s still not entirely fashionable for women to admit to the same desires. (The reverse is also true: People often deride men with low or inexistent sex drives, but it is perfectly acceptable for women to have no interest in nookie.) Why does it matter? Because in this culture, we often only talk about sexually transmitted diseases to people who fall into groups we consider promiscuous.

When educators, parents, and the media talk to women about safe sex, they focus on pregnancy. When they talk to men, they focus on STDs. As it happens, there are two big ironies in that pointless, sexist dichotomy. The first is that, in the long run, it is often women who are more damaged by undiagnosed STD infections. The second is when women are finally ready to get pregnant, the damage STDs cause often leaves them unable to do so.

STDs and Women: The Hidden Epidemic

Earlier this year, the newspapers were full of variations on the following headline: One in Four Young Women Has an STD. Those reports were the fruits of the analysis of 2003-2004 data from the National Health and Nutrition Examination Study (NHANES), which looked at how common HPV, chlamydia, herpes, and trichomoniasis had become in 14- to 19-year-old girls from a representative sample of households across the U.S. The answer was “very common,” but without the survey, the chances are good that an unhealthy proportion of those young women would never have known they were infected.

Despite recommendations that all women under 25 be annually screened for STDs, the fact is that very few women actually do get tested regularly. STD testing is not difficult—the most common diseases can be diagnosed via urine and blood tests—but it just isn’t done. Most doctors simply do not look at their female patients and think: She might be having sex, and so regular STD screening isn’t a part of their medical repertoire.

Outside of Planned Parenthood, where they are pretty good about following screening guidelines—at least for young women—even most gynecologists don’t bother with screening. Despite the fact that they usually know that their patients are sexually active, they just don’t believe them to be at risk.

Women are at risk, however, and not just the under 25-year-olds covered by the guidelines. Older women continue to have sex, and they continue to be infected by STDs. To me, the guidelines seem to be a relic of a time when most women were married by the age of 25. These days, the interval of risk lasts far longer; physicians and policy makers just refuse to acknowledge it. Unsurprisingly, those doctors who bother to test their assumptions find otherwise. A few years ago, when I spoke to one of the rare private gynecologists who actually makes a point of screening all her patients for STDs at their annual exams, she told me that she finds a couple of cases of chlamydia and other STDs a month—often among those “low-risk,” middle and upper-middle class white women who most doctors wouldn’t ordinarily bother to test.

What doctors, and patients, tend to forget is that there may be consequences—and severe ones—to not getting tested for STDs. Most people who are infected with an STD won’t display symptoms, and asymptomatic STDs are even more common in women than they are in men. This means that, without regular screening, it is possible for someone to be infected with chlamydia, gonorrhea, and other diseases for years without realizing it. Although it may seem like a minor problem—how can the diseases be a big deal if they don’t even cause symptoms?—the truth is that, left untreated, these diseases can cause long-term damage.

Although spreading STDs far and wide is a pretty distressing consequence in and of itself, untreated STDs can also have far-reaching ramifications for an infected person’s health and fertility. In women in particular, these diseases can lead to a condition called pelvic inflammatory disease. Pelvic inflammatory disease not only causes chronic pelvic pain; it is one of the leading causes of ectopic pregnancy and preventable infertility around the world.

In other words, because women usually spend the early part of their sex lives focused on preventing pregnancy rather than preventing disease, when those same women later want to become pregnant it can be a long and hard road. Realistically speaking. spending the time and money on universal STD prevention, testing, and treatment would probably save the country a bundle in infertility costs.

There is yet another twist of irony to this tale, which is that just as the country is becoming more and more aware of the extent of the STD epidemic, policy makers are making it less likely that doctors will be doing anything about it. For very good reasons, the medical establishment recently recommended that women should not receive a Pap smear before the age of 21 and that regular screenings should occur much less frequently than was previously advised. It’s true that this will almost certainly decrease the harm that occurs to women during follow-up care, but it will probably also mean that they are much less likely to end up in a gynecologist’s chair.

Many young women’s entry point into reproductive care is either birth control pills or Pap smears. Although the Pap smear is not the only important component of a woman’s annual exam, that required element is often what it takes to get them into the stirrups. I’m seriously concerned that delaying the recommended age for a first Pap smear will also end up further limiting young women’s access to STD testing—just as we’re beginning to see how common those STDs are.

On the other hand, if I were to take a more optimistic position, with sufficient education of both doctors and the general population there could be another outcome. If people can be brought to a clear recognition of the fact that STDs are extremely common and that everybody should be screened for them, then perhaps STD testing will start to become part of everyone’s annual health exams—no gynecologist or STD clinic visit required. A loss of testing opportunities for young women could conceivably end up with an increase in testing opportunity for the entire sexually active population. This whole thing might be a blessing in disguise.

The sad thing is that it probably won’t happen. A wholesale change like that in the medical model for STD testing would require doctors and patients to admit to themselves and each other that people have sex…and that anyone who has sex has some degree of risk. Guys with Porsches who pick up women in overpriced bars, nice girls who seriously date nice guys for months at a time…several times a year, high school students who get busy with their classmates at parties, young couples trying to find privacy in their crowded apartments, married people whose spouses are cheating on them—they are all at risk.

The bottom line is this: one in four young women has an STD. In urban areas, that number may go as high as one in two. There were almost a million cases of chlamydia reported in women in 2008, and those are only the ones we know about from the women who did manage to get tested. It is clear to anyone that takes the time to think about it that women are having sex. The problem is that until we can admit that women want sex, not enough people are going to be thinking about it. We’re almost a decade into the new millennium. It’s time for that to change.
Tags:
Views: 1501
Related articles

What is safer sex? We bring together clinical and practical data on STDs and their prevention, including information on identification and treatment, as well as social/cultural significance and stigmas.