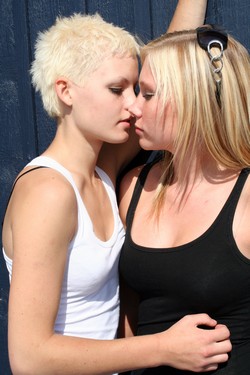 Gay Marriage May Not be the Only Way To Achieve Equality
“When the government puts its imprimatur on a particular religion, it conveys a message of exclusion to all those who do not adhere to the favored beliefs. A government cannot be premised on the belief that all persons are created equal when it asserts that God prefers some.”—Supreme Court Justice Harry A. Blackmun

Ten years ago when my aunt was dying of bone cancer, her longtime girlfriend had to battle to be with her in the ICU, because the hospital didn’t consider her “family.” It shouldn’t have been that hard. In this particular instance, the biological family had no objection, but the religious hospital to which she’d been admitted refused to acknowledge their relationship. They were happy to let me, her niece, into the room, even willing to allow her business partner, but the woman she had chosen to spend her life with? She was invisible.

My aunt’s story was far from unique. That’s why so many people celebrated when, in April of 2010, President Obama told the Health and Human Services Department that such discrimination was no longer acceptable, and ordered that rules be drafted stating that any hospital which accepts Medicaid or Medicare must allow individuals to choose for themselves who they want to have visit them—and who can help them make important health care decisions. The announcement was a great leap forward for LGBT equality. However, it was also a concrete example of the potential folly of focusing so much energy on gay marriage.

Marital rights in the U.S. vary from jurisdiction to jurisdiction. Federal laws recognize marriage for tax-filing purposes, but the fed’s primary interest in the actual institution of marriage comes from the presence of the Full Faith and Credit clause of the Constitution, which requires states to respect each other’s public acts and records—including the act of marriage.

The gay marriage movement is not the first to confront legal inequities. States, and the federal government, have argued about the rights of interracial couples to marry, access to no-fault divorce, and many other questions arising from the complications inherent in legal recognition of interpersonal relationships. Historically, the government has seen several advantages to the recognition of marriage, including encouraging stable family structures for raising children by formalizing mutual parental obligations for support.

Early marital regulations were based on the assumption that women have an unequal status in society, and that they are less likely to work, have lower incomes, and need financial and other support from a spouse. But today, it’s increasingly common for both spouses to work outside the home, and to have jobs with similar incomes.

Society is evolving, but the laws regarding marriage just aren’t keeping up. As a result, many of the rights associated with marriage provide little benefit, and may even lead to penalties—such as the “marriage penalty” of the tax code. And as more and more children are born or raised out of wedlock, a system designed to safeguard the offspring of married folk only becomes less and less viable.

Legislating Love in all the Wrong Places

If the purpose of government intervention into marriage is to support and encourage the institution of family, there is no reason to privilege heterosexual romantic partnerships. In fact, there is little reason to privilege romantic partnerships at all. In this modern world, there are many ways for individuals to have children outside of a church-sanctioned heterosexual romance. Many heterosexual couples marry with no intention of procreation.

Parenting is a financial, emotional, and social commitment at least as much it is a biological one. If a heterosexual married couple uses donor gametes to conceive, they are generally both considered to be the resulting child’s legal parents—even without a biological relationship. How then, does it make sense for biology to be used as a reason to deny two men or two women in a committed relationship the legal parentage of their children? What makes a family is a mutual desire to support and encourage one another through the joys and trials of life. If the government wants to improve the lives of children via the legal institution of marriage, shouldn’t it then embrace everyone who wants to parent—rather than restricting its support to a privileged, select few?

An “Out of State” Wedding

A few months ago, I went to an “un-wedding.” The couple involved could easily have gotten married in any jurisdiction they chose, but they instead chose not to. They weren’t taking a stand about gay rights or marriage equality; they simply had no interest in the government butting into their relationship. Why? For various personal, financial, and practical reasons, legal recognition of their marriage would have imposed an unacceptable level of burden upon them. They wanted a marriage that would be recognized by their family, friends, and society—they didn’t want a legal partnership.

When two people decide to pledge their love before their friends, their family, and sometimes their god, it’s one of the most beautiful things in the world. But is there really a fundamental reason why that pledge needs to be regulated by the government? Let the churches, temples, and mosques marry whom they will—theological approval should have nothing to do with equal access to human rights.

It makes a certain amount of sense for the government to legislate aspects of family—such as child rearing, health care, inheritance, power of attorney, competence and property rights—where official recognition offers certain uniform standards of conduct that must be upheld. What makes no sense is for the law to selectively endorse couples based on whether their union is sanctioned by the state. Gay rights are human rights. It is those rights—not the relationships—that are the business and the responsibility of the government. If the most important things that gay marriage activists are fighting for are the rights that are associated with marriage, then perhaps the solution is separate those rights from marriage altogether.
Tags:
Views: 1460
Related articles