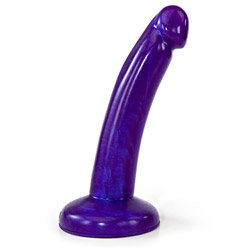 The Mistress is made out what I consider to be medium firm silicone. The Mistress is flexible enough that you can bend the head down to touch the base of the toy. Internally the Mistress is firm enough to be felt, and if I thrust too vigorously I get a bit of a punched on the inside feeling. The firmness of the Mistress also makes it easier to insert into an inexperienced orifice. A toy that is too soft can be very difficult to insert into a tight hole. The Mistress is also not so hard, or so large, that I (or others I have used it on [boiled and with a condom] feel like I am being forcefully pride open. The Mistress's head is noticeable during use, but it is not so pronounced that it is the main thing that I notice when I use it. All in all, it's very comfortable.

The Mistress's surface has a bit of a drag to it, but since I only use it with condoms I don't really notice it. I have noticed that the surface does get nicely slippery when lube is put directly on it it.

I love the design of the Mistress. The tip of the head is pointy enough to place precisely against an opening, but it doesn't feel sharp or blunt during thrusting. The ridge of the head is just noticeable enough for me to know when I am about to pull the toy all the way out or not. The girth is very easy to accommodate anally.

While one playmate was a bit concerned (or freaked out) by the length of the Mistress, I like this feature. The girth of a dildo you have to deal with no matter how much is inside you. But length gives you an option to use the toy as deep or as shallow as you want. I like deeper penetration and feel like 5" or less insertable length is too short for me personally. And when using a toy anally, I feel it helps to have a bit more length because of the area you are trying to insert the toy into is a bit more under your body and can be difficult to reach and control with a shorter toy.

The curve of the Mistress is enough for me to get a general idea of where my prostate is, without making me feel like my prostate or surrounding tissues is being poke or punched by the toy.

I really feel like the Mistress's design is great; not only is it pleasurable, it also helped me have more options in how I used the toy.

The Mistress is made from non-porous silicone and can be kept clean by washing with warm soap and water, boiling it in water for 3 minutes, or by wiping it down with a 10% bleach and water mixture.

I keep my Mistress clean by using unlubricated condoms with every use, and then I wash it with soap and warm water.

The tube that the Mistress comes packaged in is perfect for storing the Mistress, protecting it from dust and prying hands.
This content is the opinion of the submitting contributor and is not endorsed by EdenFantasys.com