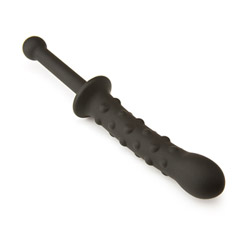 I was really excited about this toy for providing a second thrusting element while having sex with my girlfriend, and it delivered. The fact that it is also useful for solo play as well only adds to the fact this toy delivers on what I was expecting, and it's like having a secret partner to gang up on my girlfriend with.
Pros
Silicone
Good size
Cons
Handle is a little too bendy
Rating by reviewer:
4
extremely useful review

We have used it for couple's play, and my girlfriend really enjoyed riding me while I thrust the toy in her anally. In addition to making everything tighter for me, it actually directed my penis closer to her pelvis, and she really enjoyed my thrusting sensations while I was in her. I'm guessing that it had me hitter her g-spot more directly than normal. But it was like having a third party penetrating her without having to get a third person in the bedroom, so hence the name "secret friend."

The toy is made of 100% body safe silicone, which is my favorite sex toy material. It is capable of being sterilized + can be firm but usually has enough give to be more stimulating when used in a thrusting manner such as in the case with this toy.

The toy has small round bumps on the shaft, which add a mild sensation as the toy is thrust in and out; however, they are flat, so they are pleasant. We got a toy to try almost a year ago that had small knob-like bumps, and they were almost painful during insertion and removal; however, with this toy the bumps enhance the experience and are pleasant.

On the insertable part of the toy, the diameter is as claimed at 1.25" at the widest part of the bulb on the tip. The toy is 6" from the tip to the flare, so I would estimate that you can't insert the full 6" without going beyond the safety flare. That said I think the toy is more than enough to be enjoyable.

I used a Nuun hydration tube for size comparison as marginally the thickness is about the same for most of the toy. 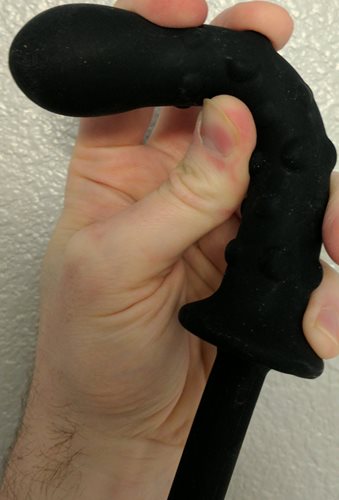 The toy is capable of being bent with some effort as you can see above. This means that it will adjust its shape when inserted vs causing your internals to bend to it, which I always find preferable.

I like the design of the bumps, as they aren't unpleasant entering or exiting. So don't get in the way of the toy being used for thrusting in and out. The handle on the end makes for an easy place to grab to manipulate; however, it's a bit thin so doesn't have a lot of stiffness compared to the insertion/thicker end. This makes it hard to use the handle after the toy is inserted.

The toy is very obvious what it is so I would not recommend taking it when traveling somewhere.

The toy was perfect for providing a second thrusting phallus for my girlfriend in the bedroom. The fact is that my own sensations were enhanced as well as my girlfriend's experience with my thrusts has been improved too, that was a huge plus.

I think the fact the handle makes initial insertion a bit difficult is the only cons I have with the performance/use of this toy.

The toy is silicone so you should only use a water-based lube with it; However, this makes it really simple to sterilize/wash off... I used rubbing alcohol and the Eden Fantasy's toy cleaner to clean the toy without any issues.

It shouldn't be stored such that it touches any other silicone toys; However, it's pretty hard to damage and very easy to store.
This product was provided free of charge to the reviewer. This review is in compliance with the FTC guidelines.