Being the entry level toy similar to the Womanizer, I didn't expect much, but I was blown away. If you're looking for a toy that offers a similar gimmick but don't want to invest the money, try the Satisfyer Pro 2.
Pros:
Feels amazing!
Cons:
Higher settings can be uncomfortable. Can be loud.
Rating by reviewer:
5
No votes for this review

My Satisfyer Pro 2 arrived in a sealed box with a peel-off sticker that shows if the product has been tampered with which I always appreciate. Inside the box between two pieces of clear molded plastic is the Satisfyer Pro 2, it looks a bit like a miniature futuristic blow dryer if you ask me. Along with the toy you get a USB charger which can be plugged into any USB charging dock or a cellphone charger. I used my old Samsung Charger, and it worked perfectly.

Two notes about the toy. The pamphlet that comes with it states that before you first use you should charge the toy completely and that first initial charge can take up to 8 HOURS. Yikes. Mine might have taken a little over 8 hours, but I'm not sure if that's the average or I'm the exception.

The second note about the toy has to do with cleaning. I turned the toy on before cleaning it (I clean any new toy even if it's pristine in a package, just a quirk I have.) and it was silent. Upon taking off and washing the silicone, for lack of a better term, pucker, the toy was noticeably louder. I found it difficult to seat the silicone in the plastic notch cut out for it and kept spinning. I'm still not sure if it's seated properly, but it is quieter now, but not as quiet as when I first got the toy. So remove the silicone at my own risk, perhaps there's a different way to clean it.

I got a little impatient and used it a few times before it was fully charged. This didn't make a difference, and I think the whole "wait until it's fully charged" is so you have a more accurate representation of the product's power level when you're using it.

That said, I just leaned back and played with it, first to get used to the sensation I used it on my nipples, which is pretty fun on the first and second setting. I found that the first setting directly on my clit is a great way to get yourself started so to speak, but it wasn't able to bring me to orgasm, or I was a bit antsy and wanted to see what this thing could do. I kicked it up to the second setting and had an intense and COMPLETELY UNEXPECTED orgasm. The sensation was amazing, and unlike any toy, I have ever used, but it did overstimulate my clit a little post-orgasm, akin to an overly eager lover. Taking it back down to the first setting made it so I could ride the sensations into another orgasm slowly ramping up; this time I took it to the third setting. Let me just say, if I was a spiritual person, I would say that I saw a deity. The orgasm was so intense, and unlike any I had ever had before.

After the first session, I was a little bit addicted. I have found that there isn't really a perfect spot for the toy to rest, ideally, it'd be directly over your clit, but it will settle for just below it or on the cusp and above the hood. All of these positions were pleasurable, and some brought me to an intense and rolling orgasm. I can't wait to try this out with more toys.

The Satisfyer Pro 2 feels good in the hand and doesn't give you fatigue. With some finagling, you can use it hands-free, perhaps under the covers with a pillow resting against it or with your legs closed on the toy. I highly recommend both of these.

The buttons are easy to use, but hard to navigate when you're using the toy, I accidentally brought it up speed and quickly brought it back down, as the higher speeds are pretty intense, but more on that later.

This toy has 11 pleasure settings, holy cow; I can barely get above the 4th setting without feeling a little bit of discomfort. I applaud those brave ladies that can crank this sucker up. Maybe if I keep using it, it'll get easier.

Anyway, the first settings are more of a puttering, if you hold your finger close to the silicone, you will feel something that feels akin to suction, but not quite. It will form a nice vacuum against the skin, but nothing scary. As you raise the setting, the puttering is stronger and feels a lot like oral sex.

Like I said, I was able to get up to the 4th setting before I couldn't take it anymore, so I cannot accurately describe how they feel. I believe some add a simple vibration to the mix along with the puttering.

My first orgasm was unexpected. Completely! With my second, I think I saw a deity. This thing is intense and for a toy that I bought before I threw the money at the Womanizer, the toy this one is "inspired" by, I am thoroughly impressed. 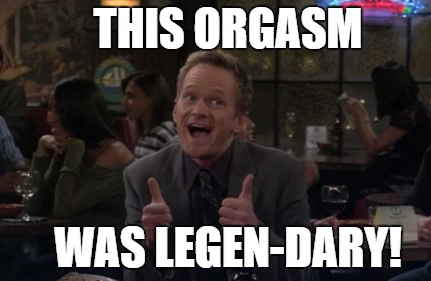 Follow-up commentary   I still like it 2 months after original review
After alternating between this and the Womanizer Premium I've been able to reach the higher settings with ease. I find the toy, when used regularly, will give you a tolerance to the sensation which means that sometimes you will need to amp up the settings to orgasm.

This relies heavily on how quick you wanna reach orgasm, where as a low-medium setting teasing/edging session is still achievable. That said, your mileage may vary. It's still one of my favorite toys and is in heavy rotation.

So far so good. Completely worth the price tag.
This product was provided at a discounted price in exchange for an unbiased review. This review is in compliance with the FTC guidelines.