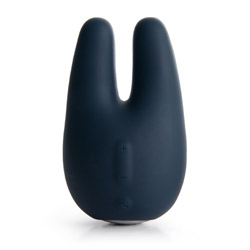 While this is obviously a luxury vibe and not cheap, it's absolutely worth it for anyone from beginners to toy aficionados. When I got it, I was so impatient for it to complete the initial charge. I knew right away it would be something special and I wasn't let down.
Pros:
powerful, great clit stimulation, holds a charge well, lots of patterns
Cons:
no internal stimulation
Rating by reviewer:
4
useful review

The Form 2 is a great clitoral vibe with strong vibrations in each of the prongs. The prongs are slightly flexible, so you can pinch a little with them if you like, but they stay where you put them. This toy isn't intended for internal use but you could easily stimulate the opening to the vagina or anus. Since the bulk of the toy is ergonomic for your hand, it's really much too big to accidentally be inserted, making this a safe option for teasing those areas.

The Form 2 is made of high-grade silicone, so it's extremely safe but is still soft in texture. I didn't notice any scents and I'm extremely sensitive to those plastic or rubbery scents that some toys have. "Velvety" is definitely the word to describe it, but while the finish is soft, the toy itself is very firm. It warms up quickly and feels great.

The unique design of this toy is fantastic. It's easy enough for a beginner but as an experienced sex toy user, I had never seen one like it and was totally intrigued. It's different from a typical rabbit vibrator because of the firmness of the prongs, which allow them to give really strong stimulation, rather than "flutter". The prongs can be used on nipples and the clit, or any other hot spots, directly or indirectly. My preference is to nestle the prongs between my labia and clit, on either side of the clit. This way, I can stimulate both the glans (external) part of the clitoris and some of the internal clitoris.

The Form 2 is relatively small and the controls need to be pressed pretty firmly to work, so it's a great candidate for travel. It doesn't take up much space and is unlikely to turn on accidentally while in your luggage.

Because of the soft finish, the Form 2 picks up dust easily, so it's best to clean it immediately and store it somewhere free from dust. I use baby wipes to clean but soap and water or a sex toy cleaner would be good options too. This toy is not intended to be boiled or put in the dishwasher because of the electronic contacts.

It holds its charge for a long time, so it doesn't need to always be in the charger, but it can't be "overcharged", so you can leave it charging as long as you like.

This toy gave me my first multiple orgasms, like other reviewers have said. It's much more powerful than you might expect from such a small toy. I never use the strongest vibration settings on most of the patterns. It doesn't get me off every single time, but it's so much fun to play with and I come most of the time when I use it. I imagine it would be a great addition to sex with a partner.
This content is the opinion of the submitting contributor and is not endorsed by EdenFantasys.com