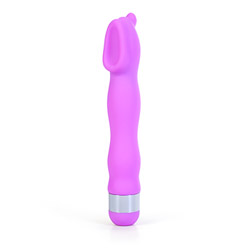 This vibrator will stop working after a while and the functionality could be improved. The vibrations are very powerful. Coupled with the rigid material, the vibrations can be pretty brutal. The shape is okay; it gets the job done, but it's not that great.
Pros
vibration variety, powerful vibrations
Cons
wore out quickly, only 1 button, very rigid
Rating by reviewer:
2
somewhat useful review
Thanks to the promise of powerful vibrations without a lot of noise, plus lots of great reviews, I decided to try this toy. I should have known the price and the manufacturer would leave me disappointed in the end. Within a month, the Clitoral Hummer was worn out. I tried new batteries, but it just wouldn't vibrate much at all anymore. It's pretty much dead; I'm incredibly disappointed.

While it worked, the vibrations were great -- I loved the highest setting. The pulse vibrations and the choices were fun, but I found myself only using about 3 of the different settings out of the 10 it had. Cycling through them was frustrating at times, I think I would prefer a dial rather than a singular button.

I also did not like having to hold the button down for five seconds before it turned off. It made being discreet a bit difficult! Also, sometimes I wouldn't press hard enough and it would just go to the next setting (messing me up for when I resume!). But it did remember the setting I was on most of the time, even after changing batteries, so that was nice.

Overall, I would say it was great the first week or two, but it's not worth even a penny because it wears out so fast. In my experience, Cal Exotics really makes subpar products. I've bought other toys by them and they always wear out so fast. If you're a light user, you may find this toy good for the price, but I would stay away if I were you.
This content is the opinion of the submitting contributor and is not endorsed by EdenFantasys.com