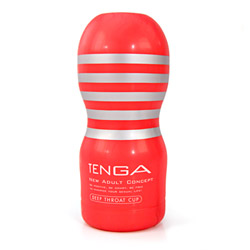 A very strong pulling, moreso than any other masturbator I've tried; it really felt like someone was sucking on me. I had to play around with it a bit to find the right rhythm, but once I did, it was great.
Rating by reviewer:
4
extremely useful review
When the Tenga Deep throat cup|Deep throat cup is first opened, the 'pre lubed' part of it becomes messily obvious. I made the mistake of opening it with the end facing downwards; this is definitely something you're going to want to open carefully and have a cloth or napkin nearby for the cleanup after the fact. That being said, it is a rather nice touch to not have to hunt down lube when you want to take the Deep throat cup for that first test drive. I just uncapped it, pulled out the foam circle at the top, and got down to business. I found it easiest to remove the entire foam 'doughnut' under the cap; I'm not sure it was meant to be completely removed, but it was too irritating to use the cup with it in place.

Sliding in, I met a lot of resistance, so much so that I couldn't push all the way in. After some experimental pokes and prods, I found a little silver dot sticker at the top; it covered a tiny air hole, which, once uncovered, enabled me to slide all the way in. I covered it with a fingertip as I moved back and forth, but found it didn't work well on the long strokes. On short strokes near the head, though, the Deep throat cup worked magic. A very strong pulling, moreso than any other masturbators I've tried; it really felt like someone was sucking on me. I had to play around with it a bit to find the right rhythm, but once I did, it was great. The exposed edges of the cup were a little uncomfortable, but I just pulled the inner sleeve out a bit until the 'lip' of it cushioned my skin from the edges.

The Deep throat masturbator heats up and retains body heat very well, perhaps in part due to the foam core. The core also provides just enough resistance to give it a decent realistic feeling. There are sensations along the shaft, which I LOVED. Most sex toys for men zero in on the head, as if it's just floating there a few inches from your body...feeling little bumps and ridges along the sides as I used it was a welcome change from head-only sensations. I employed the short-stroke method I had previously discovered, and it was an amazing finish, the sort where everything gets hyper-sensitive - so much so that removing the cup was a bit of a challenge! It tends to cling, so you may want to wait a few minutes before withdrawing if you're sensitive like me.

I'm a tech-head who loves prying things apart, so naturally I unraveled the innards of the Tenga Deep throat cup to see what makes it 'tick' - and happily found the wiggly Elastomer sleeve inside worked very well, even independent of the cup. It was also interesting to see through it as I used it, the clear gel made all the bumps and nubs visible as I slid past them. Though I finished and enjoyed with this method, the cup definitely adds a lot, and likely protects the sleeve from wear and tear. Dismantling is necessary for cleanup; I just turned the sleeve carefully inside-out and ran it under water until it was rinsed.
This product was provided free of charge to the reviewer. This review is in compliance with the FTC guidelines.