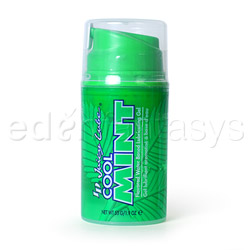 Overall, this lube is slick, relatively long lasting, and has great packaging. I wouldn't say that the taste is bad, but rather not what I expected (more like mint candy than refreshing mint). I definitely don't regret purchasing it.
Pros:
great packaging, slick texture
Cons:
flavor is more sweet-mint than fresh-mint
Rating by reviewer:
4
useful review

With the added flavor, this lube is clearly meant for oral. I suppose it could be used over other parts of the body during foreplay, but, since that's not really my thing, I've only used it for oral. I would strongly suggest against using it as a lube for intercourse or using it for oral foreplay before intercourse. Even though it is sugar-free, the added flavoring could irritate anyone who is extra sensitive.

The texture of this lube is actually quite nice. It's thin enough, but stays in place, and isn't the least bit sticky. I love the pump bottle; it makes it super easy to grab a little more lube without gunking up the bottle (even though I usually don't have to reapply).

I'm not sure it's fair for me to say that I'm disappointed in the taste of this lube. I mean, how minty fresh can you really expect a lube to be? I ordered a mint-flavored lube in an attempt to feel slightly "fresher" after oral (if that makes sense). I was hoping for a more "mouthwash mint" flavor, but instead got more of a "mint candy" flavor, which is still good but just a little different from what I was expecting.

This lube actually has pretty good staying power. I rarely had to reapply, and when I did it was because the taste was wearing off, not the slickness of the lube. The taste is alright (I'd give it a B+), but I have to say one of my favorite parts of the lube is the packaging. The pump bottle makes it easy to grab more, and it also helps prevent pouring out too much. As far as clean-up goes, it's relatively easy. It is water-based, so it comes off easily in the shower with a little soap.
Follow-up commentary   I still like it 4 months after original review
This is still the lube that I reach for when it comes to oral sex. I haven't gotten tired of the flavor yet (like I did with my past flavored lube), and it still does a great job. Thumbs up!
This content is the opinion of the submitting contributor and is not endorsed by EdenFantasys.com