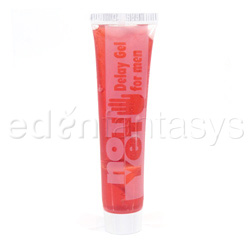 Other Not yet gel reviews

Not yet gel review

This gel did everything it promised to do. For the first time in 4 years my husband was able to control his orgasm even through vigorous sex. I would recommend every man who finishes sooner than he wants to should give this gel a try. It definitely worked for my husband!
Pros:
Makes controlling climax easy, doesn't numb partner, absorbs completely, makes erection super hard
Cons:
Wish it was sold in larger amounts
Rating by reviewer:
5
extremely useful review
My husband fractured his penis about 4 years ago, and after healing completely is left with a refraction period (amount of time until next erection can be reached) of about 4 hours. No big deal right? When paired with my husband’s pre-mature ejaculation it becomes a VERY big deal. Sex can be really frustrating because of this. There is a lot of starting and stopping to try to prevent him from finishing before he wants to. We have tried cock rings|Non-vibrating cock ring to experiment with, and while they help, they only help provide us an extra 2 minutes or so. While I don’t care if I have to finish up on my own, this is a huge blow to my husband’s ego and at times he has avoided sex because of it.

When I discovered there are creams|Desensitizing creams that can delay ejaculation, I was both elated and skeptical. I was afraid that something that numbed my husband’s penis would make it impossible for him to even enjoy sex. I looked through reviews and picked out the Not Yet gel by Doc Johnson|Gel by Doc Johnson.

We tried it the same night we received it and have used it every time we have had sex since then. Both my husband and I were completely blown away by how well this half ounce tube of gel works. It allowed my husband to have much greater control over his climax without preventing him from reaching it. As per instructions you are supposed to rub a small amount onto the penis and wait ten minutes before contact. When I opened the tube I noticed that it smelled a lot like cherry cough syrup, but it wasn’t overwhelming at all. The consistency is pretty thick which allows for better control of amount and prevents it from dripping. I used just enough to spread over his entire shaft; then we waited.

I was not numbed by this at all and did not notice any mess. It absorbed into his skin leaving nothing behind. We were very impressed by this product and would recommend it to anyone looking for a longer lasting erection.
Follow-up commentary 3 months after original review
An interesting thing has happened during the use of this product. I would have never expected it, but my husband has actually become less and less dependent on numbing products. This may not be the case with everyone, but the use of this gel has actually made it easier for him to learn how to hold off ejaculation. I thought we would be purchasing this product for as long as he is able to achieve an erection, but he actually doesn't even need it at all anymore. Before using this gel, sex was often frustrating for him because of the frequent stopping to prevent orgasm. He felt like he was ruining it for me by stopping every few thrusts. The Not Yet Gel numbed his penis enough to make controlling the ejaculation easier for him. As time went on, he began using less and less of the product, until he no longer needed to use it at all. We only ever bought one tube, and that was enough for him. I'm not sure if the outcome is due to the gel helping make his "training" easier, or if it was the confidence boost that it gave to him, or both. My husband went from not being able to thrust more than a minute or two without ejaculating, to being able to hold off for nearly 30 minutes, sometimes longer. He tells me that he is able to enjoy sex much more than he used to be able to, because the worrying and stress is out of the way. There was no permanent numbing of his penis, as he reports that the sensations he feels from penile stimulation are as strong as they ever were. We will not be buying anymore of this product. Thanks to this little tube of miracle gel, he no longer needs help with delaying his orgasm. We are both very satisfied with this product.
This content is the opinion of the submitting contributor and is not endorsed by EdenFantasys.com