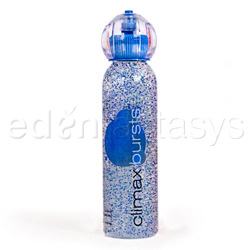 Overall I gave this 3 stars because I did not find it to be an amazing product, but that's just my opinion. To me, the cooling to tingling sensation was too intense for me because I was too busy worrying about how much it burned than to enjoy sex itself.
Pros:
Tingling sensation feels amazing if you use the right amount and the beads are very beautiful.
Cons:
Too much of this could feel more hot than cool and the beads may feel uncomfortable for some.
Rating by reviewer:
3
extremely useful review

Before I used the product vaginally, I squeezed some on my index finger (a fairly good amount) and I played with it a little before actually using it by rubbing it on my wrist and smoothing it out to see the actual texture of this product. I was really impressed and amazed it felt very silky and smooth, kind of oily but in a good way. It is in between thick and watery. I noticed that when I put a nickle/penny size amount and I tilted my hand to the side, it would run down slowly, but if I put a thicker amount like 2 quarter sizes or maybe a little less, it would stand fairly well. It was very easy to pour or I should say squeeze. All I had to do was pop the top til I heard the (pop) sound and squeeze as much as I wanted, although you won't be needing much. I also noticed that after a while it became a little sticky after I stopped rubbing it and let it air dry. It has these gorgeous little green and blue beads inside which make the product itself look so appealing and that's what drew me to this product at fist. I believe the beads inside the lube is what gives you the cooling and tingling sensation.

I did not taste the lube because I don't think it is edible. I would imagine it would taste kind of like a minty gum or candy but without the sweetness. As for the smell, to me it did not smell like anything in particular. I found it had a very, very, very light scent that most lubes carry (the ones without flavors of course, like cherry or chocolate). I found the smell to be very light, so light that I had to take constant deep sniffs to really get the aroma, but in the end for some reason it reminded me of rain. I'm not sure why.

A little goes a long way for some but not for others. As for me, it lasted a good amount. It did get sticky after a while and felt "icky and uncomfortable," especially because I felt a cooling to burning sensation in my vagina. Have you ever felt something that feels so cold/cool it seems hot/warm? Well that's what happened to me. I'm not sure if I used too much, but it felt VERY, VERY tingly and sort of hot. Also I prefer to put the lube on my fingers first and burst the beads, then apply the lube as needed because the first time I used it, we just put an index finger full of lube all over and went straight to action later to feel "sand" like grains rubbing against the inside of my walls every time he went in and out. So it works better when I crush/burst the beads before I apply it on myself or my partner.

For clean up, you could use a cloth to wipe off the excess (you may feel a little sticky later on but that's up to you), or you could wash off with water and soap. I did shower right after and I still felt the tingling, cooling/hot sensation, so I started to panic a little. I continued to wash with water and it wouldn't disappear so I washed with soap twice and it slowly started to stop. Maybe my situation might be different form others. I don't know if I'm just very sensitive to certain lubes because this is my first time trying a cooling lube. I have only used regular water based lubes or lubes with appealing smells but never a cooling or warming lube, so this was a first for me. All in all I did not really like it. I found it was way too intense for me (maybe I used too much). I will be trying it again, this time with less and I will update you as to if this was the reason why it was too intense for me. If not, I plan on giving it to my sister because I encouraged her to try it with her boyfriend, but I'm still waiting to hear about her experience and if it was as intense as mine.

It came in a white USPS Box with red and white labeling and writing. It was very, very discreet. No one knew what was inside. My sister was the one who actually brought me the box in my room. When I opened it, there was brown paper and inside the brown paper was the product itself in a clear little bag tied up. So it was very discreet. My dad would not know what was inside if he happened to get a hold of it, and my sister did not know til I opened it in front of her.

I compared it to a Victoria Secret Body Splash so you could see the size difference. 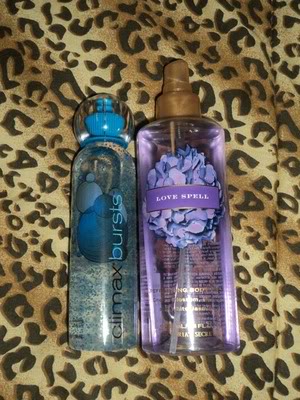 Climax bursts toy cleaner
$7.99
This product was provided free of charge to the reviewer. This review is in compliance with the FTC guidelines.