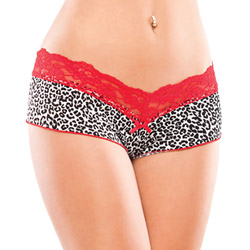 Don't Mind Me, I'm Just Giving Myself A Wedgie

The Holiday Booty Short by Coquette is cute but it just didn't work for me. The waistband is not elastic. The lace waistband is fairly lengthy so it rolled a bit as I moved around. The bottom front rolls as well. I have, what I would consider, a fairly large bum. With the "V" dip at the centre back, I really had to give myself an intense wedgie so that the top back of the panty covered my bum crack.

Important: The XL panty is actually OS/XL. I explain the differences in my review.
Pros:
soft, stretchy, cotton, cute pattern.
Cons:
no liner in crotch, both bottom and top of underwear rolls, bigger bum means more intense wedgie.
Rating by reviewer:
3
extremely useful review
The Holiday Booty Short by Coquette is available in one-size-fits-most and XL. I had purchased the XL. The booty short matches the babydoll, which is sold separately. The babydoll comes with a panty but it’s not the same style of underwear. The stock photo makes the included panty look as though it is bikini style. I haven’t purchased the babydoll yet but I plan on getting it eventually. I purchased the Holiday Booty Short to wear both in the bedroom and as an everyday-style panty.

The underwear arrived folded within a plastic baggy. There were no text or images on the bag other than a small barcode sticker. There was a cardboard tag attached to the panty that had 3 images of a model wearing the underwear and stated the company name, company website, product name, size, and colour. I don’t use the bag to store the underwear. I prefer keeping the booty short in my underwear drawer.

I’ve taken a few measurements of the underwear laying flat, not stretched. If you need additional measurements, send me a message and I will get them for you.

The waist and leg holes are not trimmed with elastic band. The waistband is made up of a red, floral patterned lace. The leg holes are trimmed with red stitching. Both the centre front and centre back of the lace waistband dips downwards into a “V” shape. Since there is no elastic waistband, it’s especially important to order the correct size. If you purchase the larger size and it is a bit too big, the lace will end up looking saggy and probably won’t hold the panty up like it should.

There is a cute red bow made of ribbon at the centre front of the panty, right below the lace waistband. The bow is just less than 1 inch in width and length. It’s secured well to the underwear but you could remove the bow with a seam ripper if you really don’t like it. The bow is very tiny and does not create any bulk to the panty. It would be fine to wear beneath clothing while out in public.

I’m not exactly sure why EF lists the OS/XL items as just “XL”, but the Holiday Booty Short is OS/XL! There are differences between these two sizes on Coquette’s sizing chart. The OS/XL gives a suggested weight bracket of 170-200lbs. The “XL” is 180-210lbs. Suggested weight brackets are not extremely useful though because it all depends on where you carry your weight for post pieces.

The underwear fit me fine and I really liked the way they looked on me. I did notice a few things that bothered me though. Firstly, the lace waistband fit nicely but after walking around in the underwear, I noticed that the lace would roll down a bit at my hip area. The panty isn’t too big for me so that isn’t the problem. I believe it’s because the trim is fairly long (2 inches in length).

Another rolling area of the panty was at the front bottom (the front of my upper legs). Typically I don’t add photos of these pieces on me but I added one and cropped out most of my leg. I took the photo below after wearing the panty for approximately 1 minute (I walked from the bathroom to the living room). You can see how it rolled upwards in the short amount of time. When I walked around a bit more and sat down a couple times, the bottom rolled upwards even more.
Experience
...continued 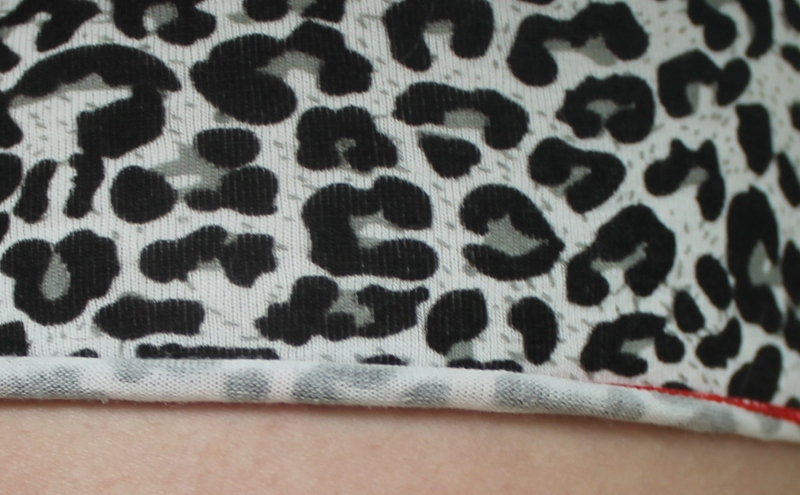 The last thing that bothered me a bit was the fact that I had to give myself a fairly intense wedgie so that the top back of the underwear covered the top of my bum crack. I have a fairly large bum so it may work better for those with smaller bum cheeks. All I can say is that I can tolerate a bit of wedgie in order to wear underwear but this was just downright wrong. It looked good but felt awkward.

The quality of the booty short is good! There weren’t any loose threads, uneven stitching, etc. The lace trim and material of the panty is soft and I have no complaints of skin irritation. The care tag states that the underwear should be hand washed only and hung to dry.

Overall, I think the underwear is cute but I probably won’t wear them again. I’ve given them a 3 out of 5 because I think they could work well for others but they didn’t work at all for me. Both the top and bottom of the underwear rolled while I wore them, and my big bum cheeks had me wedgy-ing myself so that the top back of the panty would cover my bum crack.
This content is the opinion of the submitting contributor and is not endorsed by EdenFantasys.com