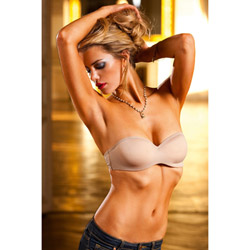 Four ways-One of the better convertible bras that I have found-not perfect but better..

While this is not the best bra on the market, it is a great bra for the price you pay. If you need a bra that you can change the straps on in a hurry, this is great. It is also a good strapless bra and does stay in place pretty well. The padding seemed to bunch up in front but other than that, everything else seemed to be made well. While this isn't a sexy bra, it is functional.
Pros
Four ways to wear it, under wire
Cons
Doesn't fit just right. Padding in cups don't lay right.
Rating by reviewer:
4
extremely useful review
The convertible bra comes in a range of sizes from 32A to 38DD. I ordered a 38B which is my new size since I lost some weight. I was skeptical as I have issues getting padded and under wire bras to fit just right.

When it arrived, it was wrapped in white tissue paper and looked like a bra you would buy at any local store. The tag on it showed the web site as www.baci-lingerie.com along with the picture of the model wearing it with both straps. in the upper right corner was the size. On the back was the other three options for wearing this bra. In fine print was the material list that showed the bra was 90% polyester and 10% spandex. Laundry instructions included hand washing in cold, do not bleach line dry, and wash colors separately. No big surprises in that area. 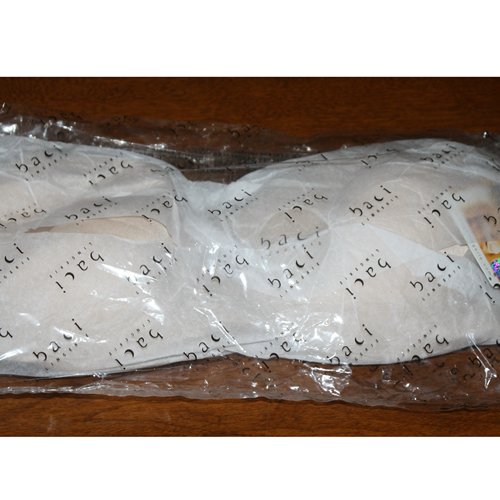 The bra came with both straps hooked and the first thing I noticed was that the straps slip into plastic hooks in the front and the back. The straps are adjustable and are just under 1/2 inch wide. They are stretchy and appear to be made fairly well. I tried the other three ways to wear the bra and they were checked out and found to be workable.

The strapless bra was supported by the under wire and while I found myself tugging and pulling at it, that is just something I do and this bra was no worse than others for the feeling that I was coming out the top of it.

The halter top style only uses one strap and it hooks into the plastic hook on the bra. The straps are long enough to do this comfortably without feeling like your neck is being pulled down.

The seams of the bra are well sown and seem to be pretty well made. Inside the sides of the bra is a rubbery substance that is there to keep the bra from sliding around and it holds true. It's not uncomfortable and it does hold the bra in place. The back is the typical hook and eye closure and has three rows of the eyes so it can be adjusted as needed.

The cups are padded with the standard padding and do seem to gather up in the middle. The padding is held in place by the material and by the seams.
Experience
I have worn this bra several times and found it to be pretty comfortable. It's not the best bra but it's not the worse by far. For the price you pay, it is well worth it. I have washed it by putting it in a laundry bag, put it in the washer on gentle cycle and line drying it. It has held up well since I got it.
Follow-up commentary   I still like it 15 days after original review
I have worn this bra several times and have been pleased with it every time. It washes well and even went through the dryer once and came out like new. I like the way I can change the straps to meet my needs!
This content is the opinion of the submitting contributor and is not endorsed by EdenFantasys.com