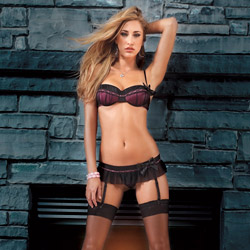 Sweet and sexy outfit that can only be worn for pleasing your man's eyes (or just for fun to feel sexy while cooking). Watch out for the sizes though I found that the bra size is smaller than what I usually wear.
Pros
Soft material, comfortable, affordable, removable straps.
Cons
Bra straps too skinny.
Rating by reviewer:
4
extremely useful review
This outfit made me feel so sexy and confident but it wasn&rsquo;t made to be worn for a long time, if you know what I mean, wink wink!

The lingerie outfit came in a plastic wrap to protect the bra and underwear which was wrapped in a nice pink chiffon paper gift wrap. I took out the bra and underwear and was disappointed for two seconds. One of the garter belts was still in the wrap and I thought it had ripped or something but to my surprise the little straps are made to come off! The Lycra material (which is often used for bathing suits) is soft and it has a nice sheen to it. The inside of the underwear is a nice flashy pink which makes for a nice surprise for your partner when you/he take them off.

I was sort of conflicted at first about what size to get but I am glad I went with the large. For the coquette line, the large bra is supposed to fit persons who usually wear 38-40 C. I found it slightly too small actually! I might have needed a D cup instead (I wear 36 C). It took a while to adjust the straps so that the bra fit with my body. The bra straps are SO skinny they do not provide any support at all. I sort of giggled when the bra just seemed to cover my breasts rather than support them (but at my age I am lucky enough that gravity is not my enemy just yet). I don&rsquo;t think that this is a major let down because I don&rsquo;t intend to wear this for playing tennis. And quite frankly, isn&rsquo;t the fact that it is easy to come off sort of the whole idea?!

The underwear is my favorite part of the outfit because it is so feminine and girly like with the sewn-on skirtini. The underwear are larger than what I usually wear (hips roughly 37 inches-small) but I have no issues with that since it allows a slightly loose fit without any marks on the skin that you can get from underwear that are more adjusted. However, I think they would need to be tighter if I was to wear thigh-high stockings (I tugged on the little straps and the underwear were pulled down quite easily). I like how the skirtini sort of accentuates my hips and that the straps dangle along my thighs as I walk around.

I actually took a nap while wearing this and I didn&rsquo;t wake up with any discomfort. The material feels delicate against the skin. This sort of material should be hand cleaned or machine washed in the fragile cycle and hung to dry. If you put them in the drying machine the heat is likely going to deteriorate the elastic property of the Lycra material and make the chiffon material start to fuzz.

Although this is not my favorite lingerie kit I do like it a lot because it is different from everything I have now. I plan on wearing it on special occasions to give myself and my partner a treat (he can barely keep his hands off me when I get sexy for him, it makes me feel like the hottest woman alive to him, I LOVE THAT!!). When I'm less occupied with term papers and projects I will plan a burlesque show for my man using ideas taken from the book by Don &amp; Debra MacLeod.
Follow-up commentary   I don't like it anymore 2 months after original review
The fit is just aweful. The bra barely holds my breasts and the underwear are too big. I have a hard time feeling sexy when it isn't fitting me correctly.
This product was provided at a discounted price in exchange for an unbiased review. This review is in compliance with the FTC guidelines.