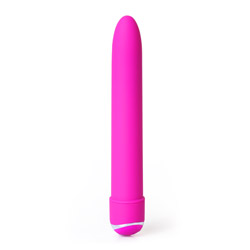 A Man's Take on the Classic Chic Vibe

If you asked me to throw out something that we did not like about this vibrator, I do not know that I would be able to give you anything. It is seriously the best money I have ever spent on this site! For the small price of about $18, all of our expectations were met and exceeded. We are definitely pleased with this purchase! Something that my wife and I were unsure of in the beginning is now something that we simply cannot get enough of. We have had our Classic Chic Vibe for approximately a week now and we have used it every night so far, pretty much as soon as we walk in the door.

We store our Classic Chic Vibe in the night stand drawer next to our bed. You could also place it in one of the toy boxes that Eden Fantasy's offers for sale, a dresser drawer, etc. It is also discreet enough to toss into luggage or a purse to use on the go. Like I said, we use ours in the car on the way home from date night! I'm thinking of having her toss it in her purse and take it to a drive-in movie with us tonight! This is truly what our relationship needed to get that vroom back!