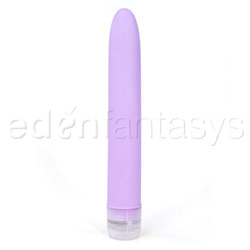 A toy I'll always have around

This is a good basic (albeit boring) toy to have for both the beginners to try and the experienced to keep around.
Pros:
texture, price, non-threatening design
Cons:
shape, hardness
Rating by reviewer:
3
somewhat useful review
I'll start off by saying I've had two of these guys around and this one was the very first vibrator I ever owned. They don't last forever. The first one I had lasted about 6 months and this second one is reaching that point. I should add that the first one still hasn't completely died but it only produces a VERY soft vibration now. That means I don't use it anymore and probably should throw it away but I can see how some people would still be willing to hold onto and use it. However, the lack of longevity in the toy isn't really an issue because they're so cheap and as I add more toys to my collection this one won't get as much use and will surely last longer.

Overall, this toy isn't great. But that doesn't mean it's not worth having. It's a basic toy with a basic design that I'd always like to have in my collection and they do a good job of making it. It may not make me scream and it won't be the one I reach for when I'm in a hurry but I'll enjoy going back to it on those lazy Sunday afternoons when I shuffle through every toy I own.

First, I love the velvety texture. It makes the toy feel very clean and doesn't cause a lot of friction. Upon opening and after using the toy I haven't noticed any odor. Unfortunately the shaft is rock hard which can be uncomfortable for penetration (at least for me). If you like that feeling it might work for you. I find that while lying on my back I don't like to insert it at all. It's too hard, with no give to it, and therefore doesn't fit my body at all. In a doggy style or girl on top position it feels much better inside but still not great. Mostly, I just use this for clitoral stimulation. I find the width of the toy to be a nice fit and covers the area that I want to be stimulated.
This content is the opinion of the submitting contributor and is not endorsed by EdenFantasys.com