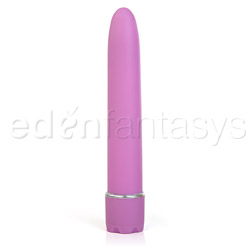 An Interesting Addition To The Toybox.

As for size, I found that it was wide enough to feel it without being too big, but that I couldn't take much of it at all. It is longer than any of my other toys and a hard plastic, which may explain why it's harder to take; it has no give. I'm sure that if I could lift my cervix or found a good position, I could take the whole toy, but I've yet to experiment that much. It's also a nice size to be fun for just thrusting by hand. One thing that I miss is the ability to strap it to something and ride it, though I'm sure that with time I'll figure something out.

Other than that, it is waterproof which makes it nice for those who like to play in the shower. It's super easy to clean; just use a bit of warm water and some soap. You do need to take the batteries out when you're not using it, but that's no different from what's suggested for other electronics. The packaging says it's safe with any lubricant, but I didn't need any for my short session last night. Overall, I think it's good for those looking for a first toy. If you don't like the vibration, there's still enough to it that you can use it as a dildo.
Follow-up commentary   I still like it 10 months after original review
While I don't use toys often anymore, this and my Pirates Pendant Vibe are the two that I use the most. They're gentler vibes and get me where I want to be---quick---on those days where I just don't have the time to spend, or when I'm too tired to give things much thought. I may not use it as much, but it still does the trick when I want it to.
This content is the opinion of the submitting contributor and is not endorsed by EdenFantasys.com

My Groovies slimline tags
About author