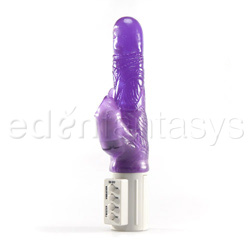 Well, the eager beaver does do a little bit of everything.

The toy itself is two parts working as a whole. The first part is the long shaft with a rather odd, and frankly slightly disconcerting, face at the end. Its long and flexible and is capable of rotating around in the vagina for g-spot stimulation. I found the rotating movements on its own to not really do anything for me. It felt interesting but I didn't receive any real stimulation from it. For me the real part of this toy is its second feature.

The shaft and the bullet parts of the toy can be operated either separately to enjoy either clitoral or g-spot stimulation, or together for a dual experience. The toy also has speed control at the very bottom, though it is limited, reduced to just high or low without any variation in between.

The entire toy is jelly-like and very rubbery. It has bumps and ridges all along the shaft and the aforementioned face at the very tip. The bullet is also covered in the same fleshy rubber and has the beaver carved into it. I don't get anything extra from the texture, but it does feel nice and is never cool to the touch.

The toy is of a decent/average size. The length of the shaft is supposed to simulate a penis though, so it doesn't work well for travel or on the go. However, I have been able to hide the toy quite easily in a drawer underneath clothes without any issues.

The shape works well for the double stimulation with the bullet based at the bottom for the clit and the shaft for the g-spot. For me it works very well having both parts going.

The buttons to control the vibrations for the toy (as well as for the rotation of the shaft) are along the bottom of the toy. There are two buttons for the bullet and two for the shaft. The first starts it on a low vibration/movement and the second is for a higher level.

It was very easy for me to access the controls for the toy, something I've run into issues with with some of my other ones. I can jump back and forth fairly easily between the low and high settings for both the shaft and the bullet with ease.

I haven't had any issues with wear and care for this toy. I use a good toy cleaner after each use and occasionally beforehand as the rubbery texture tends to collect dirt and lint fairly easily. However, I don't keep the toy in a safe toy chest but rather, at the bottom of a nightgown drawer, so keeping it safe in a chest could also reduce the amount of dust it can collect (or, alternatively, using it more often!)

As I've gone on to expand my toy horizons, I have bought and tried quite a variety of new and different types of toys. This is one I always come back to, however. The vibrations are steady and strong, but not too strong, and the rotating shaft just furthers my orgasm. For that reason, this toy remains in my "Go to" section.
This content is the opinion of the submitting contributor and is not endorsed by EdenFantasys.com