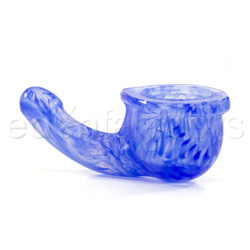 The good thing about this attachment is that it's made of 100% silicone. I have very sensitive skin and can only use toys made of silicone or metals (unless I use a condom over them). The cap is a really pretty blue swirl, which is nice to look at, and there is absolutely no odor that comes off this toy.

I tried out the Gee Whiz with my Hitachi and I thought it was an OK experience. I wasn't disappointed but I also wasn't thrown into an amazingly powerful orgasm, either.

The Gee Whiz cap is really easy to clean. I just used warm, soapy water to clean it as I know I won't be sharing this toy with anyone else. If you're going to share this toy, make sure you wash it with anti-bacterial soap, boil it, or throw it in the dishwasher.

My Gee whiz tags
About author