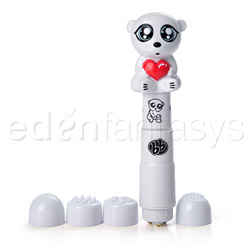 If you need something discreet that still offers some moderately strong vibrations, then the Bzzz Buddies are for you. Insanely adorable and highly collectible, the only thing that would make them better is if they had more than one speed.
Pros:
Cute - Collector factor, Moderately strong vibrations
Cons:
3 of the 4 attachments might cause pain, Only one speed
Rating by reviewer:
4
extremely useful review

Bzzz Buddies are basically your standard pocket rocket, only infinitely more adorable. The addition of the animal figures on the tops not only add a nice "handle" of sorts, but also make it less obvious what naughty things can be done with this. The vibrations aren't going to wow anybody, but are good for those who don't like strong vibrations.

Each of the Bzzz Buddies is made of plastic. No smell, smooth to the touch, and no taste. Each of the interchangeable heads is also made of the same plastic.

Each Bzzz Buddy is about 6" or so in length from end to end. The extra length over some other pocket rockets and the animal perched on top give you a little extra room to hold and maneuver, which can be a very nice thing. There are 4 different versions out right now, Frisky the cat, Paws the puppy, Pandy the Panda, and Shivers the polar bear. I have Shivers, and he's just adorable. He has a definite anime feel to the way he's decorated with his large blue eyes.

Each animal sits atop a wand-like massager that has the standard "3 ball end", with 3 little metal nubs protruding slightly from the end. You can either massage yourself with this, or one of the 4 "standard" rocket attachments.

The first is a very basic rounded cap. This one is your best bet for clitoral stimulation unless you know you like a lot of texture on your clit.

The next is one I've dubbed "pepperoni" because it looks like a small pepperoni pizza with its 5 little circular plastic nubs. This one can be a bit scratchy, but isn't too bad for allover use.

The next has 12 little plastic spikes that stick up about 1/8". This one is a bit extreme for most uses, although with a light touch can provide a nice tickling sensation.

And the last one has a lot of teeny tiny spikes. This one is definitely going to be too extreme for sensitive areas, but can provide the same tickling sensation if used with a light enough touch.

Because of the adorable factor, and the fact that nothing about it really screams "I'm a sex toy," these guys are probably ok to leave out. They're also small enough to be tucked into a purse or small bag for travel.

To get started with your Bzzz Buddy, first you have to find a AA battery. Then twist the base so the little arrow lines up with "open" and pull the two halves apart. There's nothing that really tells you which way the battery goes in, so I'll save you some trouble and tell you that the pointy end goes down towards the nubby end of the toy. Reattach the two halves, then twist the other way and you've got "on." The vibrations here are really nothing to write home about. Located mostly in the tip, they're strong, stronger than I expected them to be, but they still sound like a more powerful vibrator with nearly dead batteries. They go fairly deep into the muscle so it does function well as an actual massager, although they may numb the clit in use. As far as sound goes, if you're under the blanket with the door shut, you should be fine.

There is an o-ring that gives the toy its claim of being waterproof, and it'll hold up to some submersion, but I'd avoid keeping him underwater for extended periods of time.

Also, something I think is worth noting, with extended use, you may find the chunky portion of the base warming up. If you notice this, you should probably turn the toy off.

You can use any body safe lube or massage aid you want with these little guys. Clean up is a breeze too, just wash him in the sink with some warm water and soap, or wipe him down with your favorite toy cleaner. Since Bzzz Buddies won't pick up random particles of stuff, you can leave them in a drawer for storage, or in the original box, since it's not all that big. It probably won't hold up to long term storage, but you could also get a little toy pouch and keep the massager and all the attachments inside of it in one place.

The packaging is adorable. Filled with fun bright colors, mostly see through so you can see the adorable little buddy inside, and on the back, you even get a little story about your particular Buzz Buddy. It's solid enough to be used as storage, although it won't last forever so it might not hurt to get this little guy and all of his attachments their own little pouch. It's certainly nice enough (and adorable enough) to give as a gift, however it's definitely not discreet. If you find the term "personal massager" on your box to be risque, then keep this hidden.

This was my first pocket rocket, and while it didn't thrill and titillate me, I did get some use out of it. The rounded head gets the most use, and is my personal favorite. I did try it as a clit vibe for giggles, but wasn't that impressed with it. The level of vibration it puts out is almost exactly the same as my standby slimline when it's running low on juice, so I keep wanting to turn the vibrations up, but since there's only one level, I can't. However, I do still like it, and if they ever come out with one that has more speeds, I wouldn't hesitate to buy it.
This product was provided free of charge to the reviewer. This review is in compliance with the FTC guidelines.

Reviewed by Jul!a (Eden Writer) To the critics who despise us, go ahead and criticize us. It's your tyranny that drives us, adding fire to the flame.
Rank
7.5
wrote 560 reviews
Comments
Make a post
Forum
Thank you for viewing Bzzz Buddies – pocket rocket review page!
Top