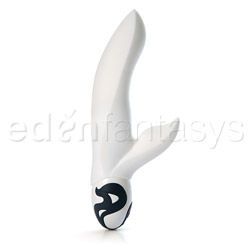 I Tango with Myself

The Fun Factory Tango is sure to please with its lovely, abstract silicone contours and powerful but not "buzzy" vibrations. 8 levels of intensity plus three pulsating patterns are controlled by two buttons plus a Turbobooster button, for those times when your solo tango needs a good strong kick. Plus, it's waterproof!
Pros:
Deep, rumbly vibrations, silicone, waterproof, Turbobooster.
Cons:
Clit stimulator may need to be fought with, no emergency off button.
Rating by reviewer:
5
extremely useful review
The Tango is my third rabbit ever. My first smelled like airplane glue and my second had a smiley face, which got to be creepy after a while. The Tango is made of silicone, so it smells delightfully of nothing. The design is also described as abstract, so there are no disturbing faces to haunt me.

I love giving silicone toys a good squeeze. The Tango is firm enough for a healthy amount of thrusting, but also has enough squish and bend to be comfortable. I'm a wuss when it comes to being penetrated by large, unyielding toys, so that's a plus in my book. The stiff material of the motor/vibrating portion comes halfway up the main shaft, so while the material there is still plush, it does not bend at all.

The Tango's controls are very simple: Three buttons run the whole show. The first two buttons are a plus and minus sign. You can either click the plus sign eight times to go through separate, increasing intensities of vibration, or you can hold the plus sign down and let it continuously increase in vibration until you find the strength you want. This is perfect for those times when Intensity 1 is too weak but Intensity 2 is too strong. It basically achieves the same effect as a slide control with a single button. Bonus--a button takes up less space and is easier to waterproof. The minus sign decreases the intensity in the same way.

My favorite button on the Tango, however, is the little nub of a button on the very bottom of the toy--the Turbobooster button. Press this button at any time while the toy is on and hold it down, and for as long as your finger does not leave the button, the Tango will deliver steady vibrations at a level higher than the highest achievable by the plus sign. Once you release the Turbo button, the Tango returns to whatever function or intensity it was at when you, erm, interrupted it.

The Tango is also waterproof. Its cap is specially designed such that when you close it properly, the design on the cap matches up so you can be assured that it won't fry you in the shower. Opening the cap is easy, but closing it on the requisite 4 AAA batteries is a little more difficult the first time. Once you've done it, though, subsequent dealings with the battery cap are much easier. I've taken the Tango into the shower and no moisture could be detected in the battery compartment afterward.

The Tango can be cleaned with warm water and soap, toy cleaner, or disinfected with 10% bleach solution. It should not be boiled, as this method may damage the electric components of the toy.

The packaging for the Tango is a fairly sleek cardboard box. The front is an open window through which you can see the Tango itself, while the sides and back have multilingual information about the toy. My favorite part, of course, is the list of picture-warnings. I would have never guessed that the Tango was not to go in my ear, or that it was inappropriate to pick my nose with it. Please do note, however, that the picture of a rather fit bum with an X through it means that the Tango is not for anal use.
Experience
The one drawback that I've found seems more to be an issue of personal anatomy than a design deficiency. The Tango performs very well as a vibrator, but as a rabbit, the clitoral stimulator is simply angled in such a way that it hardly ever brushes against my clitoris. Since the clit stimulator is just a chunk of silicone, though, it can be manually adjusted into the right position. The only problem, then, is to hold it in place throughout the entire session. This is easier in some positions than others, since I have tiny, weak hands. For example, I find it easier to angle it properly while on my back in bed than standing in the shower.

Other than that little hiccup, my relationship with my Tango has been excellent. The only improvement I could think of would be an emergency off button, to prevent awkward roommate-walking-in-on-masturbation situations. I've had a lot of fun with the Tango so far, and look forward to enjoying it for some time to come.
This product was provided free of charge to the reviewer. This review is in compliance with the FTC guidelines.

My Tango III tags
About author