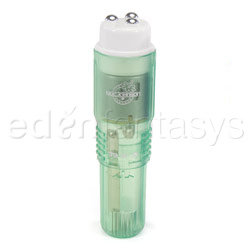 The iVibe pocket rocket is great for orgasms on-the-go. It can be thrown into a purse or suitcase with ease. Unfortunately, it only has one setting.
Pros:
It's small and discreet. Strong vibrations for quick and multiple clitoral orgasms.
Cons:
One strong setting, hard to turn on and off.
Rating by reviewer:
4
useful review
I tend to buy vibrators|Vibrators – Shop Rabbit Vibrators, G spot Vibrators and other compulsively and almost never buy just one. Because of my compulsive shopping habit and the modest price of Doc Johnson’s products, I have several Doc Johnson vibrators. If I had to give all but one away, I’d probably keep the iVibe Pocket Rocket|Pocket rocket vibrators: iVibe pocket rocket by Doc Johnson. The Pocket Rocket has inspired many intimidators but this colorful update on the original is produced by the company that started it all.

The only difference I can find between the iVibe and the original Pocket Rocket|Pocket rocket - Pocket rocket vibrators is the array of fruity color options. The iVibe line is modeled after a certain hip PC competitor that produces some of their products in a rainbow of colors. The original is priced significantly lower than this one and for someone less concerned with aesthetics, I’m not sure whether the iVibe is worth the extra cost. I, however, am one of those people who cares just much about what a product looks like as how well it works. I had to get my hands on one of the lime-colored iVibes.