It's hard to sum it up in one paragraph. Overall, I highly recommend this, especially if you want something that is more intense than anything you've ever known. If you want to spoil your body with the satisfaction of getting that much needed orgasm every time you lay down to please yourself, this toy is for you. It's hard to clean, loud, indiscreet, and could use an extension cord, but I guarantee you're going to get that orgasm you're craving, and I hope you'll love this as much as I do.
Pros:
-Guaranteed orgasms every time
-Intense vibrations that leave me pulsing
Cons:
-Hard to clean, not waterproof
-I need to use an extension cord
-Loud, too powerful for some
Rating by reviewer:
4
extremely useful review

I mean it's not like this is something I would (or could!) insert, or use on my sensitive nipples (I'm still a nursing mom), but clitorally? Heck yes! This is a classic. I needed this. I will always need this. I love this toy. Oh my god, it's amazing. Seriously. Get one. I cannot praise you enough, even if you heed my warnings that this is INTENSE. 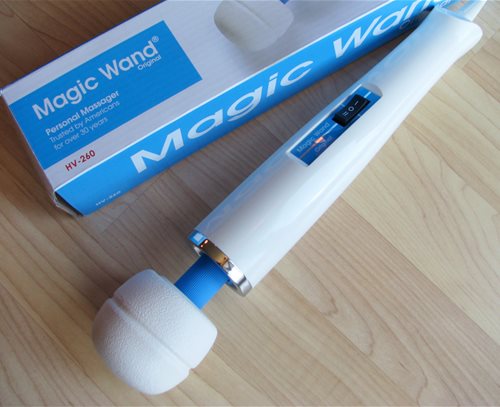 I think solid plastic is tried and true, and pretty easy to use as a whole because it's not porous and it doesnt have a smell. It usually means seams will be present, but luckily for those of us who own or consider owning one of these babies, those seams are nowhere on the "head" of the toy. Instead, there is an interesting texture surrounding it and a kind of "crevice" that sort of separates it into two parts. I'm not sure why it was made like this, but it does tend to make it a little interesting. The texture all in all does add some pretty wicked stimulation, but of course, nothing tops those crazed vibrations I cant stop raving about!

I think the design is very uncommon and very unique. It has thrown me off for years, because it wasnt very attractive to me and still isnt. The cord is inconvenient and alot of times I have to use an extension cord to use it because it is really not that long by itself.

The Hitachi is big and it's brass. It's a very heavy toy as well and often times after holding it for so long my hands and wrists just get so tired. I have arthritis due to multiple injuries and this isnt a fun feat.

Oh, boy. Where do I begin? There is one button, which you can push in two directions, and in one direction you have the "-" and in the other you have the "=" which, as I found by first testing it, are both a recipe for INTENSE, LOUD vibrations. I usually use the less intense one, the "-" because it's not so much stimulation that it hurts, while it gives me enough to make me want to scream with pleasure.

I've seen people put condoms on the heads of their Hitachis. Now that I've owned one for a while, I can certainly understand why. There are tiny little "pores" (though this is not really porous, it's all solid plastic on the outside) on the "head" of the Hitachi that can trap body fluids and lubes and if not cleaned/wiped down properly, can remain there. Which could potentially be very gross.

And not only are there "pores" on my Hitachi (even though they provide some pretty interesting texture), there is also a sort of cleavage or "crevice" as mentioned earlier, seemingly separating the "head" into two sections. This also becomes a pain in the butt to clean properly.

My personal advice is to not hold this under running water to wash it, even if you do what I do and generally use anti-bacterial soap and water. Instead, use a baby wipe, or a damp cloth with a little of that soap on it, to get it thoroughly clean. That way, you can get it clean without accidentally ruining your expensive, wonderful Hitachi.

I also have to take precaution with wiping down the entirety of the "shaft" of my Hitachi, as sometimes lube and other fluids can make their way via my hands to the seams on the Hitachi, not to mention in the "trench" of the long cord that comes attached. This is why, again, I use a baby wipe. It's safer and it's easier.

This came in a long rectangular box which also included the image of the toy on it. Inside, my Hitachi was wrapped in a thin plastic bag, with a "wire tie" holding the cord folded together with the toy inside the box. I was able to recycle the Hitachi's box, but unable to recycle the plastic bag and instead had to throw that part away. I am very big on recycling and I hate having to throw away so much plastic because there isnt a place to recycle it here. There werent any user's instructions that I can remember, but bear with me as I am going from memory as it has been over a year that I've had my Hitachi.

I do think that the box, although indiscreet and purely obvious as to what's inside, makes a great gift box anyway. It's easy, basic, simple, and a lot of people are going to hug the heck out of you for giving this to them as a present.

As far as storage, I usually am in a rush to hide this from my toddlers so it gets carelessly wrapped in a towel and thrown in my underwear drawer after use and cleaning but... If you have the time, a big satin bag or a nice sex toy storage box would be the respectable thing to put your Hitachi in. This toy is a goddess, and it deserves to be treated with respect. I owe my apologies to mine for always tossing it back in my underwear drawer. Busy mom that I am!

Vibrating wand massager
$51.79
This content is the opinion of the submitting contributor and is not endorsed by EdenFantasys.com