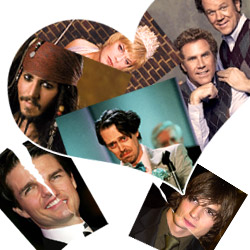 This week, the Bloggess makes us hip to all the celebs that women want to get down with...that the guys didn't know about.
Guys you would never suspect we want to have sex with but we’d totally do:
• Eddie Izzard in full drag
• Alan Rickman
• Dwight Schrute
• Gene Wilder as Willy Wonka
• Steve Buscemi
• Benicio Del Toro
• John C. Reilly
• The deformed guy from Mask because he was nice and also he seems like he’d be really grateful
• Captain Jack Sparrow
• Sam Elliot, but only if he’s talking to us
• Chris Rock, but only if he’s *not* talking to us
• Prince, even though he’s technically smaller than us
• Gary Oldman
• Adrien Brody
• Phillip Seymour Hoffman
• Both of the lead guys on Shawn of the Dead (but not at the same time)
• New Spock
• Schroeder from Peanuts
• Neil Gaiman
• Our best male friend at work whom you assume is gay but actually isn’t
• That limpy doctor on House. I think his name is “House”. And his cane.
• David Bowie when he was in Labyrinth
• Will Ferrell
• Paul Rudd
• Will Ferrell and Paul Rudd at the same time while the limpy doctor from House watches
• Your brother

Guys you assume we want to have sex with but actually we totally don’t:

• Tom Cruise
• Fabio
• Ashton Kutcher
• Our second best male friend at work who actually *is* gay but you don’t believe us
• The guy at the gym whose neck is larger than his head and he can’t put his arms down
• Carrot Top (I don’t even know why I need to clarify this)
• That same secretary at my job that you think is hot, and yeah, I know she’s not a dude but I’ve seen you ogle her and trust me, I could tap that. You couldn’t.
• That’s not a dare, by the way.
• Johnny Depp as Willy Wonka
• Your other brother

This is all going on my resume.


But what do you think, America? The Bloggess wants to know who YOU would most want to have sex with--vote now!
Tags:
Views: 2475
Related articles