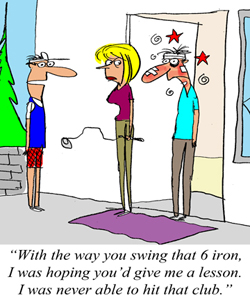 The Indian River County Sheriff's Deputy who took the report said the man was covered in bruises and contusions. And yet, for whatever reason, the man chose not to press charges.

“She told him to get away from her and he did not,” says the report. “She then grabbed a golf club and started beating him with it. She told me she used a six iron on him.”

News Channel 5 wants us to know, just in case we were confused, “A six iron is not to be confused with a six pack of soda, a six shot handgun, Six Flags amusement park, six degrees of separation, a sixth sense or a sick sense of humor.”