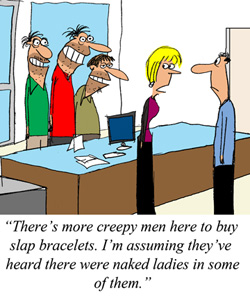 Oops. Elementary school recalls fund-raising rewards.
Remember those slap bracelets we all had in school? The ones that some schools banned because of the rumors of kids whose bracelets almost killed them? Something about the metal slitting through the plastic or cloth cover and cutting the kids' wrists.

Well, they're back! And they're drawing more controversy than ever!

A hundred and sixty students at Jay Elementary School in Jay, Fla., were given slap bracelets made of recycled metal measuring tape as a reward for some kick-ass fundraising they did. And as kids are wont to do, they took their neat new toys apart.

Can you guess what was inside? We bet you can.

Naked ladies! There were naked ladies under the cloth.

Parents called in with their too-crazy-to-be-true story, and naturally, the principal didn't believe it … until one of the parents brought a bracelet in to show him and it did, in fact, have naked ladies on it.

Santa Rosa County School District spokesman Bill Emerson said, “It was one of those calls you get from parents where you say, 'Really?' Then it turns out to be true.”

The school recalled the bracelets and contacted the manufacturer, but they say they've got no idea what happened. They bought the bracelets from a company in China.

No harm, no foul, says the school, and apparently the parents! No one's calling for anyone's head on a platter (yet). They're labeling it an accident, pure and simple. Good for them.

Editor's Note: News reports were later corrected to say that the images on the tapes were of scantily clad women, not naked or X-rated. Thanks heavens, right?
Tags:
Views: 1480