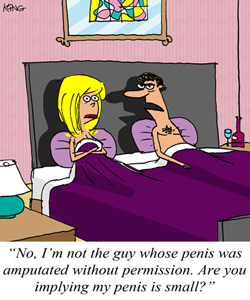 Circumcision turned into cancer surgery ... and the patient sued.
There are some stories you just know are going to turn up as a scene in a horror movie one day. Phillip Seaton, 64, went into the hospital for a circumcision meant to relieve inflammation and came out with a partially amputated penis, according to CBS News.

Seaton, perhaps not surprisingly, is suing urologist Dr. John Patterson of Frankfurt, Ky., for performing the 2007 surgery without Seaton’s consent. Patterson says he discovered a deadly cancer and saved Seaton’s life by amputating part of the penis: “What I saw was not a penis. What I saw was cancer,” Patterson testified in Shelby County Circuit Court.

CBS affiliate WLKY reports that Seaton, who can’t read or write, had signed a form consenting to allow his doctor to “perform any unforeseen condition found necessary.” Seaton says he never gave permission for amputation (Patterson removed about an inch.) Experts have testified for both sides.

Patterson said the cancer prevented him from using a catheter on Seaton, CBS reports, and that he was concerned about kidney damage. Deborah Seaton, the plaintiff’s wife, was in the waiting room but Patterson didn’t consult her because she hadn’t previously accompanied Seaton to the office or pre-op area, which he found unusual.

“My impression was she would not be someone I would ask what he would want,” Patterson testified.

OK, we’re not experts, but you know the saying about it being easier to ask forgiveness than get permission? Maybe that’s an old saw best not applied in certain cases.

(Update: A jury ruled against the patient later in the day, apparently concluding that the surgeon behaved properly and should not be liable for damages.)
Tags:
Views: 1508