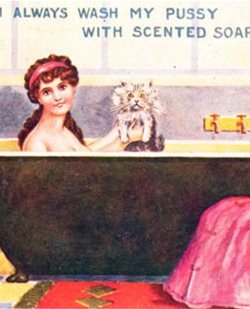 anonymous 1920s postcard
The Man Who Won't Eat Pussy - Fact or Fiction?
One of the great things about sex is having a whole pile of dirty little secrets that, for the most part, nobody knows. At college, a girlfriend loved going to church immediately after having sex, in the knowledge that nobody in the room would have guessed the quiet, mousey girl in the Laura Ashley prints had spent the morning swinging from the light fittings. Nobody mortal, anyway. Another prepared for her French Oral exams by... well, you can guess. With a French boy. And how sweet she sounded when she confided later, she’d have passed if only she’d been asked the right questions:

But not all our secrets are quite so alluring, and there’s a few that it seems very hard to even have discussions about with friends. For example...

Or don’t, or can’t, or just plain refuse. And no, we’re not talking about the ones who don’t know what they’re doing, or give it a go but are always more interested in doing something else. I mean the ones who just plain won’t do it. Who won’t talk about it, either.

Why do we so rarely hear about them?

Several reasons. Firstly, well, it’s probably our fault. In general terms (meaning there’s always an exception, and if you are one of them, well done), women are a lot less likely to ask (or tell) a guy “lick my pussy” than a guy is to suggest “suck my cock.” We may hope, we may hint, we may even try to maneuver ourselves into such a position that he really has no choice. But let’s go back to your first make-out sessions, in the car or wherever, and you’ve been kissing for ages. And suddenly his hand is on the back of your head, and he’s pushing your face down... down... down.

How many of us ever did that to him?

Or: You’re waking up, still half asleep, and something brushes your lips. You open your eyes, or open your mouth, and there it is, an early morning stiffy, demanding you give it some loving.

Again, how many women ever do that?

A thousand other examples. Men are a lot better at asking, or showing, for what they want in that department, and the girl who says “no” also knows that she will probably never hear the end of it.

When the boot is on the other foot, though (or the mouth is on the other organ), things are very different. Guys are not only more demonstrative. They are also a lot more evasive, too. If a guy does not want to do something, he simply won’t. And unless the girl comes out and asks directly, why have you never eaten me out?, the subject will never be raised. If you will pardon the pun.

The thing is, this reluctance is a lot more common than you’d ever guess from reading or researching the subject. I Googled an appropriate phrase and got five million hits (5,070,000 to be precise) but even from scanning the first page alone, it seemed most were either repeats of the same two or three, or were going off in another direction entirely. I tried a couple of searches on Sexis, and found none. I got tipsy with some friends one night and asked them outright. Non-committal is the closest I got to a “never.”

But then an e-mail arrived the next morning from one of them... “I didn’t want to say anything in front of the others, but....”

And have you ever said anything to him?

“Yes, but he changed the subject.”

Naturally. I had one too, and he was the same.

So, the man who won't eat pussy. We know he's out there, no matter how much society refuses to admit it. Now let's ask what his reasoning might be?

We’ll dismiss the conditioned responses first: “I’m not any good at it” - meaning, presumably, an ex-girlfriend told him that he wasn’t doing it right, and never thought of showing him what worked for her. Oh, and no jokes about guys never asking for directions, please.

Or, “I didn’t think you’d want me to” - meaning... actually I’m not sure what that means, but your concern for my well-being is greatly appreciated. It’s nice to think he still regards you as an untouchably Lady-like Goddess even though he once saw you choke on his cock.

Those are the answers which, providing they’re the true answers, give you something to work with. But there are also the ones that, frankly, feel impassable.

Here's a few selections from my Googling. Taste and smell. He doesn't like them. Fair enough. Especially if we disregard the hypocrisy here, because we all know that cock always tastes and smells delicious, especially after it’s been cooped up in a pair of tight pants all day at the height of summer. “Texture” was an intriguing reason as well... he doesn’t like the way it feels on his face. But you can bet that he’ll happily shoot a dickful of slime over her’s.

Snarky rejoinders aside, all of these are fair reasons (I do not want to say “excuses”), and there’s a lot of girls who use them as well. If you don’t like, you don’t like.

Male pride arises, too. A lot of people, men and women, view oral sex as a submissive act. Personally, I think of it as being quite the opposite - for a guy especially, it must take a lot of faith to put something that delicate into a dark hole with teeth, and trust it not to bite down. But the manly man who sees every woman as little more than a source of pleasure and a depository for his sperm probably doesn’t think like that, and the idea of placing himself in that position is an act of adoration too far. As Bill Sykes tells Nancy in the musical Oliver, “of course I love you. I lives with you, don’t I?”

But all of these thoughts are indeed just that. Things to think about. The real question, and one that I cannot answer, is why?

Why will both sexes happily discuss, analyze and agonize over her refusal to sail on the Good Ship Lollipop, but not a word about his reluctance to try some fish and finger pie (in case you ever wondered about that line in “Penny Lane”.

Is it because men simply don’t want to acknowledge that they just don’t enjoy something that other guys rank up there with football, cold beer and pretzels? Because (and, given what we just observed about pride, there’s definitely some 1984-style doublethink going on here) they’re afraid it will make them seem less manly? Peer pressure (perceived or actual), in other words?

Is it because women rarely push the issue, either in private love talk or public forums, and some guys genuinely don't even think it's an issue?

Or is it simply that we have stripped away so many of the barriers that once surrounded suitable topics for polite conversation, that it’s actually reassuring to know there is still one that nobody wants to talk about?

Well, I do want to, and that’s my dirty little secret. What’s yours?
Tags:
Views: 2480
Related articles