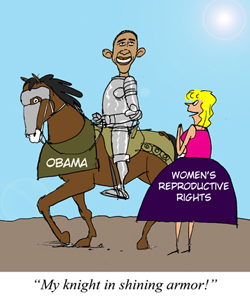 Don't worry! Ads won't be all abortion, all the time.
After the last year we’re surprised –but pleased– to be able to say this: it was a good weekend for women’s reproductive health rights and services.

Private abortion clinics in Britain were already free to advertise in all other media and the AP reports that the Broadcast Committee of Advertising Practice has now given them the green light to advertise on television. Non-profit clinics were already allowed to advertise their services.

The organization’s spokesman, Matt Wilson, said that “there is not going to be some sort of free-for-all saying: ‘Come to us to get an abortion.’ They are not there to promote abortion, they have to promote an array of services.”

On our side of the pond, President Obama vowed, on the anniversary of Roe V. Wade, to protect the rights of women to control their own reproductive decisions, saying, “the government should not intrude on private family matters,” and “…as we remember this historic anniversary we must also continue our efforts to ensure that our daughters have the same rights, freedoms and opportunities as our sons to fulfill their dreams.” You can read more of his speech –and his administration’s decision that all employers aside from churches and other places of worship would be required to cover contraceptive costs for their female employees– in the Huffington Post.

Can we just vote for him now and be done with it?
Tags:
Views: 1193
Related articles