Another State Jumps on the Embryo-Viewing Bandwagon 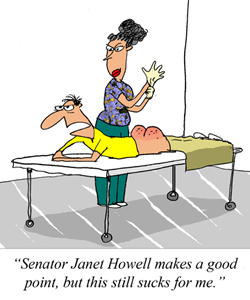 Senator Janet “Lovey” Howell steps in with a suggestion of her own.
In protest of a bill that would force women to get an expensive, pointless ultrasound – at their expense – before having an abortion, the Huffington Post reports, Senator Janet Howell (D) “attached an amendment that would require men to have a rectal exam and a cardiac stress test before obtaining a prescription for erectile dysfunction medication.”

The Republican controlled Senate rejected the amendment – but we kinda like that they did so – by a narrow squeak, 21-19. In a voice vote they did pass the pointless ultrasound bill (can we just start calling this type of legislation PU?), despite the fact that similar measures have proven to be a “bureaucratic nightmare” in Texas (Though, honestly, the doctors' schedules are the least of our concerns. Our hearts go out to the women on the tables.), and face federal challenge in North Carolina. As of this writing, the formal vote has been delayed until Wednesday says the Richmond Times-Dispatch.

Anyway, good for Senator Howell for making a point. And kiiiiiinda telling the anti-choice crowd where to stick it.

“The Virginia senate is about to pass a bill that will require a woman to have totally unnecessary medical procedure at [the woman’s] cost and inconvenience,” she told HuffPo. “If we’re going to do that to women, why not do that to men?"

We’re going to call her “Lovey” Howell from now on. We love her.
Tags:
Views: 1220
Related articles