Can we blame Columbus for Syphilis or not?! 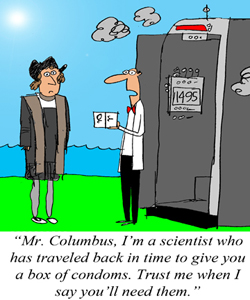 He is to blame. He is not. He is to blame... Oh, who knows, really?
Back on Columbus Day, we reported on a LiveScience story relieving Christopher Columbus of the blame of bringing Syphilis back to Europe from the New World.

Now, LiveScience is reporting that Columbus may, in fact, have been responsible for that unpleasant little souvenir after all.

The first outbreak of Syphilis was recorded in 1495, and was thought to have been in Europe long before that, but wasn’t separated “from other rotting diseases until 1500 or so.” Plus, skeletons found in Europe that pre-dated Columbus showed evidence of the disease, both points which you’d think would grant Columbus reprieve of his transmitter status.

But George Armelagos, of Emory University, investigated prior reports and found “the skeletal material didn’t actually meet at least one of the standard diagnostic criteria for chronic syphilis, such as pitting on the skull,” among other things. For that matter, the reports that didn’t meet the criteria came from areas where a dietary staple was seafood that contains “old carbon” that could “throw off radiocarbon dating of a skeleton by hundreds or even thousands of years.” Factoring that in, those skeletons that showed signs of the disease “appear to be dated after Columbus returned to Europe,” said Emory’s Kristen Harper.

So can we blame him or not? Isn’t that what everyone wants to know about an STD?

Molly Zuckerman, of Mississippi State, wraps it up in a very satisfying way. She says, “The current evidence is pretty definitive, but we shouldn’t close the book and say we’re done with the subject. The great thing about science is constantly being able to understand things in a new light.”