Midori's Postcards from a Sex Nerd: Ni-Chome, the Gayborhood of Tokyo

Welcome to Tokyo—my hometown. As I return frequently, consider this the first of an irregular and ongoing report of the soft and moist sexual underbelly of this megalopolis and the beautiful nation it infects.

Tokyo is a mind bogglingly huge city, labyrinthine in its urban landscape and social structure. It’s as organic and natural as a Borg colony – a living, breathing mechanized vast organism composed of nearly 13 million lives. With all the layers, contrasts and contradictions of my birthplace, I find the best way to experience Tokyo is through a series of personal tours. I ask my friends to show me a sliver of their Tokyo. It’s a travel strategy that’s worked well for me in many places, but in particular an excellent approach in Tokyo. It opens doors and shows me back alleys, both literal and figurative, which otherwise I would have never known.

Recently, on an unusually cold spring night my spouse and I met up with Monica in the Shinjuku San-chome subway station. She’s a saucy lesbian comic artist friend who’s very active as an organizer and general rabble-rouser in the lezzy graphic artist community. 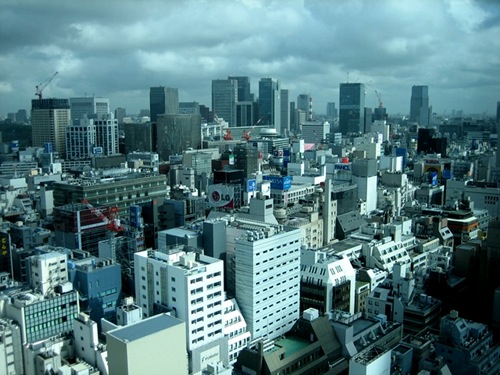 Tonight she’s taking us on a budget tour of Ni-chome, the gayborhood of Tokyo. Tokyo is a notoriously expensive city but with a little planning and spirit of adventure, especially in the realm of food, you can stay on budget and not do too much damage to your wallet. 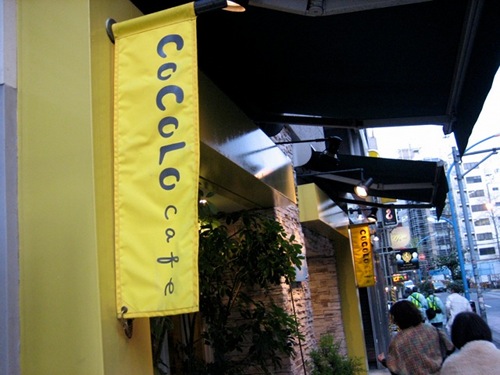 First stop, Cocolo Café, is a friendly and casual local eatery with a mixed crowd, cheery staff, and range of food.

Don’t miss the table at the entry way packed full of flyers that can give you leads to other fabulous fun not easily accessible through English-language web searches. Information abounds for current parties, bars, art events, hair and other personal care service providers, social clubs, event private party space and even a few dungeon rentals. Most are in Japanese.

Cocolo is easy to find and welcomes everyone. I found many of the gay and lesbian bars and entertainment establishments are heavily segregated by policy or pressure. It seems that the gay guys and lesbians, who prefer “bian” in local queer slang, don’t mix and socialized as much in Japan as I’m used to on the West Coast. Many gay places don’t welcome women and lesbian places don’t welcome men. Foreigners aren’t always welcome either. Whether such discrimination to entry by commercial establishments is legal or not wasn’t clear to me, but it is a common practice that Japanese accept without question. 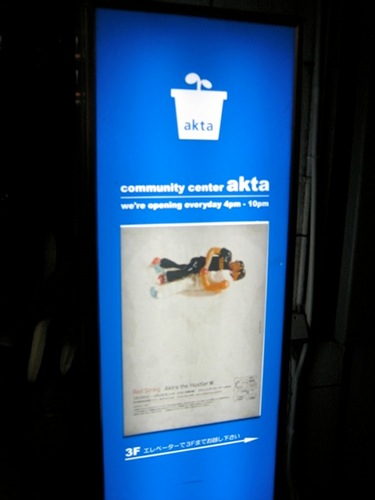 Monica then took us to hang out a bit at AKTA, a community center and gallery focusing on HIV prevention, outreach and empowerment of sexual minorities.

We rode a creaky elevator up to the third floor. The place was buzzing as volunteers in matching bright yellow t-shirts emblazoned with “Delivery Boys” finalized their evening’s strategy and loaded up their bags with condoms and information packets. The staff was welcoming in this cheery space full of information for LGBTQI resources in Tokyo and rest of Japan. It’s free and open to all ages, genders and sexuality. It’s a rare little corner of gay life in Japan, not centered around alcohol. Come on by, sit a spell, make some friends and have a cup of tea while reading up on clubs and arts in the area. 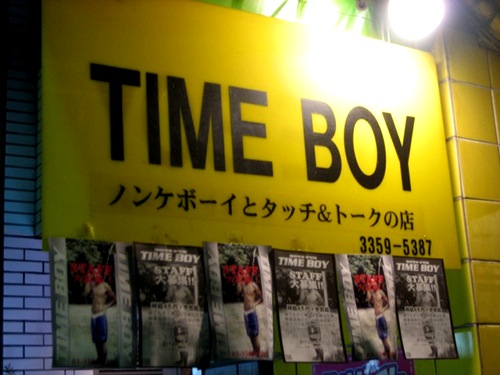 Ni-chome is essentially bars, eateries, clubs and gay sex joints packed into a three or four block area. Bright signs for bars sprout up along the lengths of all buildings, each of them a dozen stories high. Each building is packed with tiny bars seating only a few customers.. Cast your eyes up and look for bars in the upper floors. Dead during the day, the area comes alive at night and is buzzing on the weekends. It’s not a multi-function gay neighborhood in the way that the Castro, West Village and Le Village are. It’s more like Soho in London, but Soho is still more multifaceted than Ni-chome. 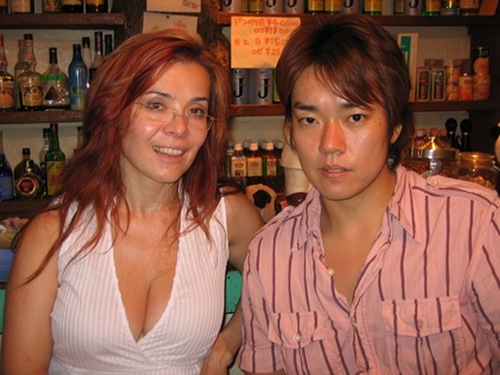 Our last stop for the night was a women’s bar up in one of those bar buildings, located across from a Shinto shrine and graveyard. It was the historical burial ground for prostitutes, female prisoners and other forgotten throwaway women. This area is still considered tawdry. Rumor has it that the government is hell bent on cleaning up and sanitizing Ni-chome and it’s hetero counterpart, the Kabuki-cho red-light district, in an effort to bid for the Olympics in the future. If they close down the gayborhood and het bars, where are the visiting athletes supposed to go play?

Up a narrow and hazardous stairs we climbed to enter a smoky bar with seating for 15 at the most. Predictably there were no men there. Cocomi is a casual and inexpensive hangout with dedicated regulars. The owner, who is young, hip and sexy, specializes in oden, a delicious Japanese country stew. The down side of Japanese lesbian bars is smoke and heavy smoking. Upside of Japanese lesbian bars is the ease of starting up a friendly conversation. It’s much easier than any dyke bars I’ve been to in multiple cities and nations. How easy are they to pick up and hook up with? I’ve not gone into that part of my research phase yet, but when I do, you can count on reading about it here!
Tags:
Views: 1217
Related articles