Sexy is a Journey 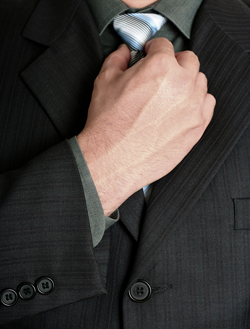 There's so much more to being sexy than just body image. Here's what Roland concentrated on when he decided to get his sexy back.

Finding my “sexy” was an incredible journey that changed my life.

I spent twenty years of my life being called a “minger” – a quaint British term for somebody ugly. It wasn’t until I moved to America – where I learned that a British accent was considered quite a plus - that I realized the problem in England had never been with me, but with the assholes who’d decided to stick the “minger” label on me.

In fact, I realized then that what Eleanor Roosevelt had written in 1937 was right: “No one can make you feel inferior without your consent.”

That’s why I decided then and there that I wouldn't let anybody make me feel like a “minger” ever again. I was going to be “sexy” instead. Ten years later, I’m living the results of that decision.

But sexy, I discovered, is a journey – a deeply personal one that differs for everybody who embarks on it. Mine is guaranteed to be different from yours, but if you’re seeking “sexy” in your life, perhaps some of the techniques that worked for me will work for you too.

I once scoffed at people who went to the gym. I’d boast about spending an hour “training my mind” with a good book rather than training my body by lifting weights or running on a treadmill. But I was wrong.

Embracing physical fitness was one of the most noticeable things I could ever have done to feel “sexy.” It transformed me from a podgy and pale bookworm to a lean and mean menace with muscles where fat used to be.

And it had other benefits.

During some of the darkest days of my pre-sexy existence, I’d become such an overweight couch potato that I’d actually started to struggle to “perform” sexually.

Physical fitness, it turned out, works better and more consistently than Viagra – and when I’d started working up a sweat three times a week in the gym, I found my body performed in ways I’d only experienced as a teenager.

I’d recommend starting a fitness regime to anybody who’s struggling with feeling sexy. Even if you start small – just walking 30 minutes a day, or trying out one of the Wii fitness games – the euphoric effects of exercise will transform your life.

The standards of “sexy” for men and women are different. So-called feminists often complain that women have to adhere to standards of beauty that men don’t, but they ignore the fact that men have other standards they have to live up to – ones that go beyond dress size or hair color. One of them is success.

This doesn’t necessarily need to mean “rich” (although name a romantic film or book in which the hero wasn’t and I’ll give you a cookie). But “sexy” men are rightly expected to have their financial and professional shit together.

Taking a long, hard look at my own life – and where it was going – forced me to establish priorities, make plans and start off on the road to a better future. Getting my shit together, and knowing that I was on the road to bigger and better things, was an important part of making me feel “sexy”; and making sure people perceived me as such.

If there’s a single factor that I contribute to feeling “sexy”, it was the deliberate decision to cast away negativity. I’m a big believer that you attract what you project; and that's why people who complain a lot never have a shortage of things to complain about!

When I realized this, I decided to become a “positive” person – but it wasn’t easy. It forced me to give up some of the most enjoyable, cathartic aspects of life: complaining about my circumstances, blaming other people for the bad things that happened to me and bitching about other people behind their back - all the stuff that’s fun to say (and fun to listen to!) but not so fun to reap the repercussions.

Negativity is like a poison you drink, hoping it will make other people sick. By weaning myself off negativity, more and more positive things happened to me.

Abandon negativity. Embrace positivity. It’s the sexiest thing you can possibly do.

Doing It For Yourself is Sexy

I’ve often wondered: Did I start perceiving myself as “sexy” because I was hitting the gym, making more of a success out of my life and being a more positive person? Or were those simply the manifestation of my sexy new perspective?

Perhaps what really changed me from “minger” to “magnificent” was something far more subtle and intangible than a gym membership and a promotion. It was a decision to stop caring about what other people thought of me, and start doing things for myself instead.

I’d considered myself a “minger” growing up because bullies used to label me that. As soon as I took a step back, and took a look at the name-callers, I realized their words were meaningless.

Today, as I scan the pages of Facebook, I see my former bullies are still living in the little cattle town we grew up in; their lives little different to how they’d been when we were at school together. I realize now that they’d only said those mean things to me because they were a reflection of their own insecurity; and how my potential had highlighted it.

That realization was liberating; and confirmed that my journey towards “sexy” had only truly began when I stopped worrying about what other people thought of me, and started living my life for myself.

And that’s what “sexy” means to me – rejecting the labels other people place on you, and embracing your own identity. Hitting the gym and getting a promotion is great; but the only true secret to “sexy” is making the decision to believe that you are.
Tags:
Views: 1338
Related articles