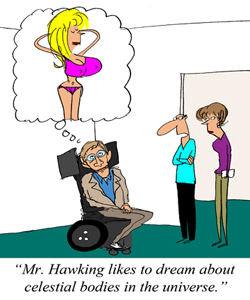 If he doesn't get women, nobody ever will.
This is the final proof that there’s no such thing as being smart about love.

Stephen Hawking, one of the world’s most renowned physicists was asked recently by New Scientist what he thought about most of the day.

“Women,” he said. “They are a complete mystery.”

There you have it. One of the world’s greatest minds, and no different from the rest of us when it comes to the infinite probabilities of the beguiling, tender, fickle, frail, fierce and frustrating human heart. We never thought we’d get to say this so we’re going to savor it: Don’t feel bad, Hawking. We don’t get it either.

MSNBC’s Alan Boyle did a sweetly reflective piece looking at the image of the brainy scientist totally unraveled by the feminine mystique (i.e. Sigmund Freud wondering “What does a woman want?”), and Hawking’s own romantic history. The piece includes two marriages and a fancy for Marilyn Monroe, who he'd prefer to meet over Isaac Newton, given a shot at time travel. Professor Hawking suffers from Lou Gehrig’s disease and is almost completely paralyzed but Boyle tells us the illness doesn’t affect his sexual potency (he has three children). Boyle quotes Hawking as saying “The disease effects only voluntary muscle.”

The fact that one of the most revered intellects in the world thinks about human relations (of some sort) all the live long day is more exciting for us than any new news about the nature of the universe. Makes us feel just a little bit less alone in it. That’s a cool discovery.
Tags:
Views: 1241
Related articles