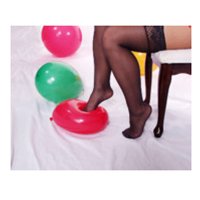 http://images.fineartamerica.com/images-small/ready-to-pop-michael-madrid.jpg
It comes in many colors. It's smooth and fun to play with. If you put your mouth on it and blow, it'll get big. What is it?
Thousands of men and women have a fascinating relationship with balloons. These people are called looners. Looners are balloon fetishists. That is, they are individuals who get sexual gratification from balloons. There are popping looners and non-popping looners. Popping looners, or poppers, burst their balloons and non-poppers avoid balloon bursting. Sounds simple enough, right?

Now, some self-described looners may describe their relationship with their balloons as strictly platonic, but there are those who get their rocks off. Poppers will overinflate their balloons and sit on them or poke them until they burst. The noise from the popping of balloons gives an adrenaline rush to these fetishists which excite them sexually. The act of watching something expand is also sexually inviting to many looners. A popper may get anxious or excited the larger the balloon gets in anticipation of it popping, which symbolizes a climax. This excitement can motivate looners to fill a whole room full of balloons!

Not all looners are alike. Looners are unique to what they like the most about balloons. Blowing them up, popping them, rubbing them, scratching them, and sleeping on them are only a few avenues a looner might take to tickle their fancy. Colors, sounds, touch, and shape factor in for most looners as well. Simple party balloons aren't the only items receiving affection from looners. Some prefer blow up pool inflatables to please their desires as well. Each looner is as unique as the fetish itself. In the world of underground fetishes, this stands out as one of the most creative.

There is, however, a darker side to looning. Like any sexual avenue, moderation is the healthiest principle to strictly practice. The adrenaline rush associated with looning can harm a person's psychological well-being if not monitored by moderation. If a person is torn between their balloons and their friends for fear of being ostracized, it can hurt their development of relationships. Looning should not replace relationships or become an alternative to social interactions.

YouTube and bloggers host many looner videos showing looners interacting with their balloons. There are also many online communities that are available for looners to share their experiences and desires within the safe environment of other looners. These environments could make a looner comfortable with their fetish and expand their social groups, which may in turn help develop personal relationships.

This is certainly an interesting fetish that seems relatively harmless in certain circumstances. As long as it doesn't affect a person's well-being or stunt their personal relationships, why shouldn't one blow up a balloon and have some fun?
Tags:
Views: 1649