Sex workers speak out ~ Interview with a Pimp. 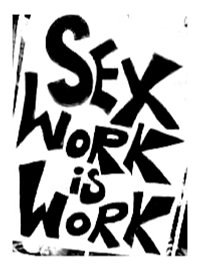 "Everyone has favorite criminals. Mine are pimps. We can all rob a bank; we can all sell drugs. Being a pimp is a whole other thing."

When Joey was 15 years old, he was forced by his grandmother to attend his mother's funeral. This is not something that he wanted to do. He hated his mother. He was glad she was dead. For years he was forced to watch her sell her body and soul. And even on one occasion, her little boy. When he was 9 years old, his mother had forced him into a room with a man who scarred him for life. He was raised with a mother that was a whore. That was normal for him. But the day his mother sold him was the day his life changed forever.

By the time his mother died, he pretty much learned the way of the world. He knew how to support himself. He worked full time, paid all the bills, and took care of his own basic needs, along with the needs of his much younger sister who was only a few years old at the time of their mother's death. In reality, Joey's grandmother was too old to care for them, but he had to make it look like she was the best person for the job. He didn't want to lose his sister. He knew that if they didn't stay with the grandmother that had turned her head to the awful things that her own daughter did all these years, then who knows if he would ever see his sister again.

Joey didn't want to say much about the childhood version of his sister; he doesn't like to associate such a small child with the world of sex. But he did tell me that he never let anything happen to her. He was her protector. He knew that if he didn't protect her, than no one would have. His own mother sold him, and she had been married to his father. They had been high school sweethearts before he passed away when Joey was a toddler. Joey doesn't remember his father's face, but swears that he can remember his love. “When I think of when I was a baby, I can't remember us all as a family. But I remember how much we were loved. My mother and my father loved me. But when my father died, my mother lost it." What would she do to a daughter that she never wanted? She didn't even know who her father was.

Joey grew up and moved on with his sister. Claiming that he never thought about his mother, he worked his way up to being head of sales at a major manufacturing company. He was living in a decent neighborhood where everyone knew each other. He was married and had a couple of children of his own. He kept a wonderful relationship with his sister, though she seemed to never be able to keep a job. "She just never seemed to grow up. She just liked to hang out and do what she wanted. I don't know if she just hated to work or if she just thought it was a joke. One day she would have a job, and then next she just wouldn't." At one point, Joey realized that his sister was spending an obscene amount of money for someone that hadn't had a job in months. He kept pushing her to find out where the money was coming from and she claimed she had a rich boyfriend. One day, he found out the truth and it was his worst nightmare.

When he confronted her, she spilled the beans. His sister had been selling herself on the streets. Even worse, she was doing it in one of the worst areas he knew about. He knew, because it was the same area his mother had worked. This hurt him on so many different levels. He tried to reach out to his sister. His wife tried. No one got through to her. She was young; she had all the attention and money she desired. How would he be able to stop her? She was going to end up dead too. He lost his temper and trashed his sister’s apartment. He told her all about their whoring mother, and all the details he had purposely left out over the past 20 years. He physically grabbed her, held her down and screamed at her. He told her that it was in her blood, that she was trash from birth. And the only thing she has to look forward to in life is the day she can sell her own children. They parted ways with only one promise, to never speak again.

It was a couple weeks of tears and pain later when he got the call. He was informed that his sister had been beaten unconscious and was taken to the emergency room where they admitted her. She was in the hospital for just under a week. When it was all done and over, she still wanted to be a prostitute. That is when Joey made his decision. He was not going to lose his sister. No matter what, he was going to stand by her side to protect her from evil, from the men she sold her body to, from herself.

"My mother was a prostitute. If I had been her pimp, she would still be alive." Now he is what so many women need. He has 7 ladies right now, down significantly from a couple of years ago. He has never slept with any of his ladies, nor ever laid a finger on them. That is not what they need him for. He is their protector. He is there to make sure that when they are done, they are able to walk away. He does not charge his ladies for his services. This is how he explains his job description. "Basically I am a glorified secretary. I make my money on top of what the clients pay for their ladies company. Instead of following the stereotypes, spending my day smackin' my hoes when they don’t make enough money, I am simply there for them. Instead of being out on the streets, not knowing if the next time will be their last, I bring in the business and they take care of it. We turned my sister’s house into somewhat of a brothel. There are two rooms dedicated to business. The girls make more than they did on the streets, and I get a decent cut as well. I am there when business is in progress. And I make sure my ladies have everything they need from the basics to protection from their world. With me, they make two to three times as much as they did on the street. I wouldn't have it any other way."

I think we can all agree that pimps hold a pretty bad name, from the ones we see on T.V. to the ones we read about in the news. But I personally would love to shake the hand of this man. He has stepped up and taken their lives in his own hands. Not only to protect them, but to show them that they have someone that will be there for them, not just to make a quick buck to support his addiction to gold chains and fur coats, but to make sure that when the job ends, they are still around to talk about it.

He is a pimp because he takes a cut, but of course he does. How could he dedicate himself to protecting these women and support his family at the same time? Family...that is something I had to ask him about. What does he tell his wife when he leaves for work in the morning? This one will surprise you. He tells her everything. She was actually the one that was in total agreement when he decided his sister needed protection. She knows where the scheduling book is. She even helped his sister decorate the rooms they use for the "business." He says, "She knows that I would never do anything with these ladies, or to hurt them. We love each other and would never hide anything. Though I don't let her come around during business, I don't try to exclude her either." Wow. I say that is one strong marriage!

As with everyone else in the world, Joey has something to say to the people who look down on him for his work. "I am not forcing these women into a world of sex and misuse. This is their decision. They ultimately decide their own fate. I am just here to make sure that they are here long enough to make that decision. I was just like the rest of you. I hated prostitution and everything involved. I hated everyone who did it. But ultimately I chose to be there for my family. Now I see this is a job, it’s a means to an end. It took me a long time to realize that. But I know now that this doesn't define someone. My mother was a whore, but ultimately, she was broken inside and out. I am just here to make sure that these ladies don't end up the same way. Instead of being whores, my ladies are being working girls. They work like everyone else, regardless of whether you agree or not. They will always be here because there is someone to care for them. Until they decide to leave the business. I will be here for them whether that makes me a pimp or even a monster in your eyes."

Joey also wants to say something to other prostitutes. "Do what you need to do, just make sure you are smart about it. If you don't have someone around to protect you, find someone that will at least talk to you. There are services out there that will do safe calls. I even provide them for people who do not work with us. You might have to search around the internet for a bit, but take the time to do it. It will be worth it in the end. And if you can, try to be open with people in your life, or at least one. It will make your life much easier."

Thank you Joey for taking the time to answer my questions. I salute you for all the time and energy you put into protecting the people in your life. You are a good man, and your wife is a great woman. I wish you all the best of luck. I also want to thank my twitter fans for getting me in contact with Joey; it's not every day that we get to meet a real live pimp!

Look for more articles for the Sex Workers Speak Out series coming soon from sex workers in all sectors. Ranging from Cam Girls, to Escorts, and more!
Tags:
Views: 2322