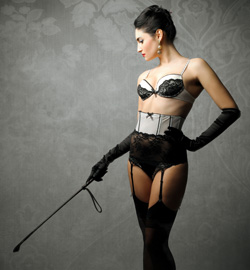 As Alanis Morissette sang in “You Learn,” every experience, no matter how painful or how gigantic a waste of time, teaches us something. I learned something this week, something that was supposed to be pleasantly painful but in the end turned out to be one of those swallowing down the jagged little pill moments.

How to Be a Submissive

Here’s the thing: I’m not a sexual submissive. I’ve known women who are, and who really get off on the psychological thrill of being told what to do in and out of bed. Over the course of my research, I read there’s no such thing as a “born submissive,” but I’m not so sure that’s true. It has to be in the psychological makeup, or it’s just not going to be pleasurable.

Though I married a strong man who’s a natural leader and has opinions on how I should brush my teeth (and everything else), I never think of him as my “master.” I never want to be told what to do. Depending on the severity of my PMS, I might even suppress wild-animal-like rage when asked to get him another beer.

I especially dislike being told what to do in bed. Nothing takes me out of the moment quite as quickly as a sudden: “Rub my nipples!” I want to rub his nipples, but only when I want to. The mental image of a drill sergeant in bed with me doesn’t turn me on.

Before I launched into the book project, my experience of male dominance-female submission was pretty much limited to the movie Secretary and Selena Kitt’s book The Surrender of Persephone. I like reading about D/s (Dominance/submission; even the quirky capitalization reflects the exchange of power), and Secretary’s just a well-done film. It’s not a fantasy I’d like to act out, though…unless given the chance to enrage Christian Bale by doing something incompetent in order to get him to swear at me in his hypnotically sexy Welsh-English-American-whatever accent.

So, to pull off an e-book on the subject of sexual submission required good, old-fashioned research.

Subjects Not Covered by the Dewey Decimal System

Undeterred, I hopped a bus and went to the larger city next door. There I began to search the books. Again, typing terms like “bondage” and “sexual submission” yielded little; these subjects are just as unpopular with public libraries as they are with magazines. I had to work smarter, browsing the large sociology section for books covering sexuality, then scanning their tables of contents and indices.

This took me a couple of hours. I didn’t mind so much, since the “big library” has a café where I could sip French vanilla cappuccinos (out of a vending machine!) and takes notes on my laptop. My serious study of a mountain of books about sex seemed to amuse the guy at the table next to me. By the time I was ready to catch the bus home, my stack of books was less mountainous, but still outlandishly oversized. Still, I could gain only a few rudimentary facts about the BDSM lifestyle, and even less about D/s specifically, from these volumes. It was time to go to the Internet.

When I filled in the outline I’d been given and formatted the book, I felt I’d made a damn fine thing.

So You Want to Be a Submissive

I was shocked to discover, about two months after I’d finished writing the thing, that the buyer was so disappointed in my work she was cancelling the project. Maybe she’d try again, she informed me, with a new writer.

The book I wrote wasn’t what the buyer wanted at all. Maybe I was too much of an outsider, and these manuals are best left to someone who lives within the lifestyle. Maybe I was too analytical and not passionate enough. Maybe subconsciously I was too judgmental, even if I do like to think of myself as an open-minded person. In the end, my work went to waste. I didn’t get paid, I didn’t get my work out before the public…I didn’t even get to keep the rights to my writes. I learned, though.

So you want to be a submissive? Buy the manual when it comes out. I didn’t write a word of it, so I can say that without the least bit of self-interest. The dark, edgy side of sexuality fascinates, though, whether you’re a submissive female, a submissive male, a dominant of either (or neither) sex or something else entirely. D/s teaches you to know your wants and needs and to maintain a healthy sense of self-respect. That may seem ironic in a lifestyle devoted to the giving up of control to another person, but I found it be true. Like any of the great world philosophies, D/s encourages you to first know thyself. Only then, once your own feelings have been mastered, can you learn to serve another. Only then can you don the studded leather collar and become a human footstool.
Tags:
Views: 2508
Related articles