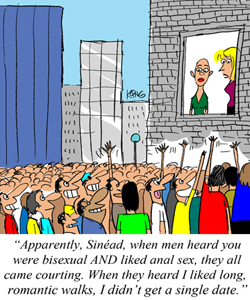 To sum it up nicely and quickly, Sinéad O'Connor rocks. She's just too cool for school. Nothing compares to Sinéad O'Connor's wit and unabashed description of exactly what she's looking for. She's on Twitter and her own blog, talking about the things she wants to do to the man who fits the bill, and just who that man has to be.