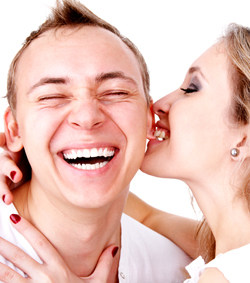 I’ve never really been all that keen on telling people in anger or irritation to bite me. Not sure why. Maybe it’s because I’ve always known deep down it didn’t make much sense. After all, the implication tends to be that the offender should bite the offended person’s naughty bits.
This seems to favor the asshole getting to piss you off and hurt you even more. I just don’t see the up side if the person took me up on my challenge. I don’t want bite marks on my dick and balls, thank you very much.

But you know, there seems to be some confusion around teeth and sexual activity, and the “bite me” phrase is probably a good sign of that. Mostly, there seems to be a desire to use teeth too often and inappropriately. The thing is, though, unless a person is into pain or has a vore fetish, they generally don’t want to be gnawed on, and even gentle nipping needs to be selectively used.

This topic started rolling around in my mind thanks to a Twitter post by one of the EdenFantasys accounts (might have been @SexIsMagazine or maybe @EdenCafe; I don’t recall) that linked to a humorous article at Cracked.com on bad sex advice from Cosmopolitan magazine, “7 Sex Tips from Cosmo That Will Put You in the Hospital,” which revolved around painful things being done to men’s sensitive gonads, one of them involving teeth (making it a painfully funny article, I guess).

Most of the bad sex advice was so bad it doesn’t even provide a springboard to good sex, in my opinion, but I will admit that teeth have their place. At the same time, we’re not savages, and each gender has some places that are definitively not chew toy material in most cases.

I wouldn’t go so far as to grab hold and yank, like a dog doing tug-of-war over a towel with its owner, but some nibbling during kissing is pretty cool. This is definitely an example of something to be sprinkled in periodically as spice and not a regular habit, though. But a little nip from time to time, or very occasionally taking gentle hold and pulling the lower lip out just a little—especially while making sultry eye contact—and then releasing it and going in for more traditional kissing…Well, that’s a useful tool in your sexual arsenal. Nibbling the tongue of one’s sex partner during some Frenching or dragging one’s teeth down it can be cool as well.

Drawing blood, not so much. Unless the other person is a masochist.

Now, as for those other lips…you know, the woman’s lovely, fragrant and tasty vulva? Don’t do it. Just don’t. It’s just too sensitive down there to be fucking around with sharp dentition. A much better approach, if you want to straddle that line between discomfort and pleasure (which can be cool), is to firmly pin one of the vulval lips between the upper lip and the tongue, which can provide a good amount of pressure without sharp pain. Also, drawing your lips far inward while sucking will basically provide indirect tooth action, as you will get the hardness of the teeth but cushioned by your lips. Nice thing there is that you’re also biting yourself gently, so both partners get to taste a tiny sample of rougher play.

And, after all that about the vulva, I shouldn’t have to say this, but I will anyway. My fellow men—I’m pretty sure most lesbians already know better since they have woman parts—only pain sluts want their clitoris gnawed on. Many men don’t seem to have gotten that memo. Please make sure you do.

The earlobe is a good spot, though it has some sensitivity and isn’t very thick, so proceed slowly at first. But it’s a pretty tough piece of gristle and a little nipping or grazing with those front teeth works great here.

The neck can be a good place for a little vampiric action, as long as you’re not actually trying to get to the red stuff. The more sensitive parts of the neck—the sides and front—are probably best reserved for sucking rather than nibbling most of the time. On the other hand, the more you head toward the back of the neck and the shoulders, you can get a bit more forceful, punctuating wonderful strokes and tickles with the periodic bite of passion.

Moving down to the thighs for more nipping and tugging—they can take it—and around to the sumptuous ass cheeks. Those are made to take a spanking. They certainly can take some bites among all those licks and kisses.

Up, down and around and on to the…

It’s My Junk, Not Junk Food!

…no! Stop right now! My scrotum is not a peach so don’t be taking any nibbles there. Seriously.

In short, there is a reason you are told to aim for a guy’s nuts if you have to get away from an attacker. It’s because we have delicate parts all out in the open. God’s cruel joke to us, which might be why men overcompensated with the patriarchal shit (that and jealousy over the fact you ladies can have multiple orgasms).

It’s not just the testicles in the scrotum that react badly to being smacked around. The scrotal skin, itself, is also pretty sensitive. So, if you’re planning on bringing teeth in, I suggest you stick to some light scraping like you might do with your fingernails. Don’t nip. Don’t chew. Please, for the love of God.

And that brings us to the penis. Surely, that engorged tool, able to thrust in and out at rapid speed and be jacked off mercilessly at times can take some dental stimulation, right?

In those earlier years, I didn’t generally remark on the teeth. I probably should have, but didn’t. That’s because she was only good at oral sex then; not fucking fantastic blow my brain out the back of my head when I come at oral sex. I was concerned I would blow her slowly growing confidence, so I suffered some teeth now and again and very, very slowly and gently started dropping hints about what she should do more of—and when she was doing all that more often, I told her to stop with the teeth.

Thing is that cocks are tough in many ways, but also sensitive. While some careful, precise, and only occasional use of teeth might be useful at times, when going up and down on the shaft, those teeth are like a damned cheese grater being drawn over our skin. Or at least that’s what it feels like to me.

The Paradox of the Nipple

You may have noticed that I’ve failed to address the nipple—whether the female or male of the species. The nipple is a tricky one, especially for women—though the rules are similar for men.

On the one hand, nipples are kind of tough. You can pinch them and pull them a bit (though I advise restraint on both activities – don’t treat them like stress balls or stretchy toys), you can flick them, you can suck hard on them. Shit, babies are hell on the nipples during nursing, and women still generally retain the ability for those things to send messages straight to the clit when an adult starts licking and kissing them.

But at the same time, they are sensitive.

Unlike the other areas, where I feel comfortable making some fairly big blanket statements about how most people would react, the nipples are much more of a case-by-case thing. Some people may fly up to the ceiling (in a bad way) if you so much as nip lightly, or apply light, and ongoing pressure, or drag a tooth across the nipple. Others will scream (in a good way).

My wife, who is no pain slut by any means, has found great joy in the use of clothespins on her nipples, both for the pressure and stimulation they provide over time, as well as for the rush of new tingling sensations when they are removed. But even so, I’m pretty cautious with my teeth.

So, the ultimate lesson here: Teeth can be a wonderful sexual tool, but in my opinion, the more an area of the body responds well to tickling and warm exhales from a lover’s mouth, the less likely they are to welcome dentition.

Yes, that’s right. We want YOU to write something for SexIs! See this post for details!
Tags:
Views: 2171
Related articles